The WEIDEMAN CO., from the 1890s through the 1940s, was one of Cleveland's largest companies and one of the largest wholesale grocery firms in the U.S. The original Weideman Co., founded by German-born JOHN C. WEIDEMAN, was a wine and liquor firm established in 1861 on Old River Rd. in the FLATS. In 1864 the firm was reorganized as Weideman and Tiedemann, wholesale grocers, on Merwin St. The company moved to Water (W. 9th) St. in 1873, where a 4-story building was constructed. The company remained at this site, constructing additional buildings as the need arose. 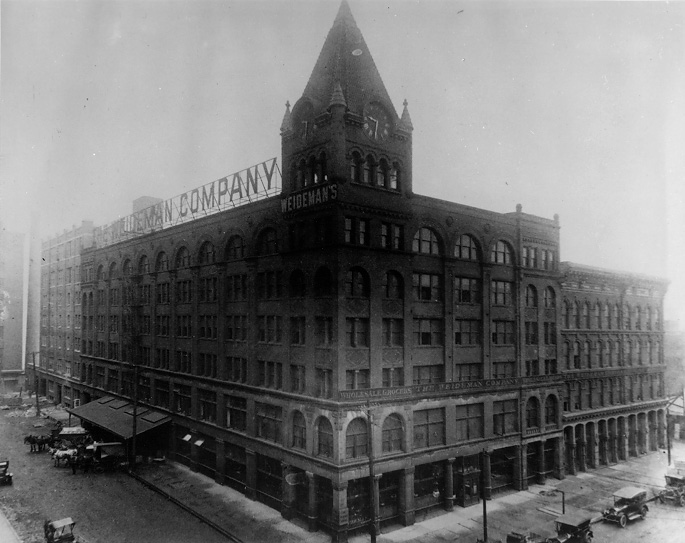 Horse drawn wagons and automobiles can be seen in this image of the Weideman Building, on W. 9th St. near Lakeside Ave., ca. 1920. (CPL).

The firm grew rapidly and was incorporated as the Weideman Co. in 1889, with J. C. Weideman as president. In 1898 the most noteworthy portion of the company's complex (designed by LEHMAN AND SCHMITT) was built. It featured a clock tower, a landmark in the neighborhood. After Weideman's death, the company continued to prosper, first under the leadership of E. J. Siller and Christian Narten, and later Christian's son, Lyman, who served as president from 1932-50. By 1920 the complex at 1233-66 W. 9th consisted of 7 buildings.

Weideman's was known for carrying the finest goods on the market, comprising full lines of staple and fancy groceries, teas, coffees, spices, canned goods, tobacco, cigars, and liquors. "Weideman Boy" brand foods were distributed throughout the Midwest. After PROHIBITION, the company gained the title of "Ohio's oldest beverage dispensary," and became renowned for their liquors. In the 1930s and 1940s, the Weideman Co. acquired wholesale grocery firms in northeastern Ohio, including the Cleveland-based William Edwards Co. In 1952 Weideman's itself was acquired by Consolidated Grocers of Chicago, which became the Sara Lee Corp. Weideman's W. 9th St. buildings were demolished in 1953.