The WORKERS GYMNASTIC UNION, known by the initials of its Czech name, Delnicke Telecvicne Jednoty (DTJ), is a Czech gymnastic association formed in Cleveland in 1909 to promote socialism, gymnastics, and to retain Czech heritage among members. The DTJ organized in Prague in 1897. Members of the socialist Ferdinand Lassalle Society dramatic and educational club organized the first American DTJ unit in Cleveland in 1909. The Mt. Pleasant unit began in 1911; by 1925 its gym classes attracted more than 200 participants and also offered dramatics and educational activities. The Bedrich Engel Club, organized in 1912, put on Czech plays and focused its activities on drama. 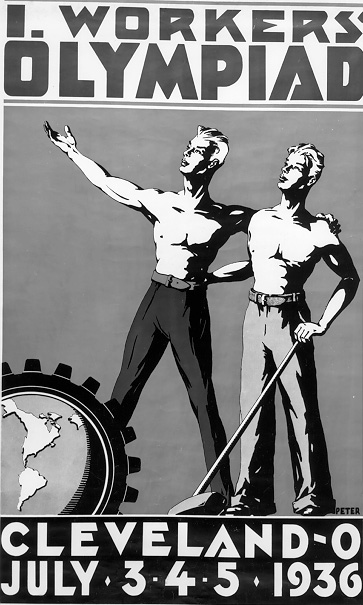 This poster promotes the Workers Olympiad, which was held in Cleveland in 1936 as a protest of the Olympic Games held in Nazi Germany and the capitalist control of sports in the United States. WRHS.

The Cleveland DTJs survived attempts at Communist infiltration and expanded their activities in the 1920s to attract 2nd-generation Czechs by forming English-Speaking Clubs. Other DTJ units formed and disappeared more quickly. In 1925 the DTJ District Council began work on Taborville, a 110-acre summer camp and cooperative village near CHAGRIN FALLS, the idea of Czech editor and DTJ gym instructor JOSEPH MARTINEK, financed by selling one-third acre plots to DTJ members and supporters. Annual events included Czech Day (est. 1923), July 4th gymnastic exhibitions, and harvest festivals in August, started in 1934 to raise funds for the American Labor News (see AMERICKY DELNICKY LISTY). Upon the demise of the News, the DTJ began to publish a monthly newsletter, the Mt. Pleasant News and Views. In 1995 DTJ secretary, Helen Havlina, served as editor, a post she held since the newsletter's establishment in 1962. Taborville also hosted the first American Labor Olympiad in 1936, attracting gymnasts from various countries. The socialist nature of the DTJ moderated after World War II and during the McCarthy era. The Communist takeover of Czechoslovakia split the organization. Moderate Socialists, however, expelled Communist infiltrators as early as the late 1930s. A new Cleveland unit, the Masaryk Club, formed in 1958 with many recent immigrants among its members. Membership remained constant between 1959-73, with 4 Cleveland-area units and 600 local members. By the 1990s, DTJ had nearly 410 members, with 50 families in permanent residents at the Taborville complex. Membership was diverse in distribution. The remaining DTJ units in 1995 were the Mt. Pleasant Gymnastics Unit, the Taborville Junior Unit, and the VOJAN SINGING SOCIETY. Each unit holds annual events at Taborville.