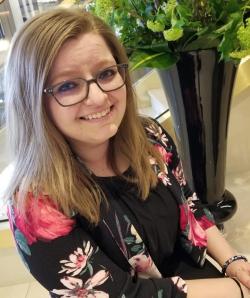 Jaimee joined the Office of General Counsel in 2022.

Prior to joining CWRU, she was a paralegal for numerous small NE Ohio law offices. While her work was mainly focused on state and federal criminal defense, she also has a background in domestic relations, bankruptcy, juvenile law, and estate planning. Jaimee has acted as a voice for Ohio inmates by fighting for new and more accessible literature in Ohio prisons.

Outside the office, Jaimee enjoys spending time with her family and rescue pup, Gia, going to concerts, and cheering on the Cleveland Guardians, Browns, and Columbus Blue Jackets.