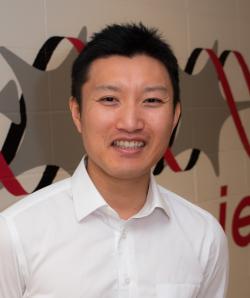 How neurons generate information to drive behavior? The Tabuchi lab's goal is to understand how neural coding impacts molecular/cellular signaling, plasticity, and behavior. We apply multidisciplinary approaches in Drosophila to understand how non-canonical (temporal or analog) neural codes represent persistent internal drive. Our research scope includes hierarchical interactions of gene expression, biophysical properties such as ionic currents, temporal structure of membrane potential dynamics including spiking patterns, functional synaptic connectivity of neural circuits, and behavior, with fundamental questions of what is the determining factor of processing performance in a neural circuit, what kind of molecular and cellular events can be attributed to, and how exactly do these events have a certain power in modulating the neuronal, synaptic, and behavioral states of the animals. By answering these questions, we expect to gain key insights into the principles of neural codes underlying persistent internal drive of the brain and to provide a framework to understand how these factors ultimately contribute to our health.

1. Molecular and Neural Mechanisms of Sleep

We are interested in understanding the relationship between sleep quality and neural coding. I previously discovered that sleep quality is determined by clock-driven temporal coding in an arousal circuit.  I also delineated the molecular and biophysical mechanisms underlying the effect on downstream arousal circuits on temporal codes and identified a novel form of synaptic plasticity driven solely by the temporal pattern of spiking. Along this line of study, the lab studies how neural codes impact molecular/cellular signaling to regulate sleep quality by applying methods of in vivo intracellular and extracellular electrophysiology, in vivo functional imaging, optogenetics, and sophisticated behavioral analysis.

I previously identified the first neural circuit encoding protein-specific hunger (named DA-WED neurons) and found that DA-WED neurons are critical for protein hunger in Drosophila. Using a combination of molecular, genetic, computational, and electrophysiological approaches in Drosophila, we are interested in understanding how temporal structure of membrane potential is used as non-canonical (temporal or analog) neural codes in DA-WED neurons for the persistent internal drive of nutrition-specific hunger/satiety.