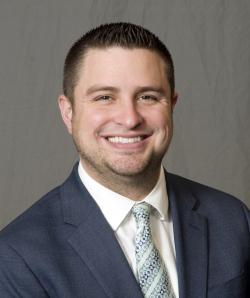 Mr. Lewis is an Assistant Professor for the Physician Assistant Program in the CWRU School of Medicine. Professor Lewis received his Bachelor of Science in 2008 and Master of Physician Assistant Studies in 2011 from University of Mount Union in Alliance, Ohio. He worked as a PA in the Head & Neck Institute at the Cleveland Clinic between 2011 and 2014 and then moved to Boulder, Colorado where he continued practicing in otolaryngology. He has served as a clinical preceptor for various students since graduating from PA school in 2011. Professor Lewis has given lectures on several different topics to many PA students. He was a question writer for Rosh Review, an online medical board review question bank. He is an avid Cleveland sports fan and, in his free time, enjoys snowboarding, basketball, soccer, and traveling. He lives in Broadview Heights with his wife and their dog, Gatsby.