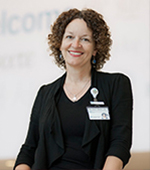 Rev. Dr. Amy Greene is director of spiritual care for the Cleveland Clinic Health System. She heads a team of chaplains, holistic nurses and family liaisons who help patients, families and staff deal with illness, stress, death and bereavement. She has been an ordained clergywoman for nearly 30 years, and has worked as a chaplain and chaplain-educator for almost 20 years. She came to Cleveland Clinic in 2007 to become director of the chaplain training program, and became department director in 2013. She holds the Master of Divinity from Union Theological Seminary in New York City and a Doctor of Ministry from Ecumenical Theological Seminary in Detroit. Though she is a native Southerner and 40-year resident of Atlanta, she enjoys life on Lake Erie. She is married and the mother of two grown sons.