Shannon E. French is the Inamori Professor in Ethics, Director of the Inamori International Center for Ethics and Excellence, and a tenured member of the Philosophy Department with a secondary appointment in the law school at Case Western Reserve University. Since 2017, she has served as the General Hugh Shelton Distinguished Visiting Chair in Ethics for the U.S. Army Command and General Staff College. She has also been a non-resident Senior Associate at the Center for Strategic and International Studies (CSIS) in Washington, DC. Prior to starting at CWRU in 2008, she taught for eleven years as an Associate Professor of Philosophy at the United States Naval Academy, where she served as Associate Chair of the Department (later Division) of Leadership, Ethics, and Law. She is the author of many scholarly publications, including The Code of the Warrior: Exploring Warrior Values, Past and Present, editor-in-chief for The International Journal of Ethical Leadership, and an associate editor for the Journal of Military Ethics. 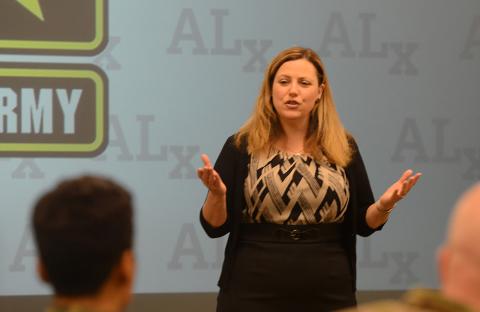 Dr. French speaking at the U.S. Army Command and General Staff College in 2015. Photo courtesy of the U.S. Army.