The AQUARAMA, the largest passenger ship to operate on the Great Lakes, was built in 1945 in Chester, PA as a troop transport ship named the Marine Star. The 520-ft. ship with a gross tonnage of 12,733 was equipped with a single-screw, oil-fired, turbine-propelled engine. The freighter was purchased in 1953 by Sand Products Co. of Detroit and towed to Muskegon, MI, for a two-year conversion to the 9-deck luxury-class ferry Aquarama at a cost of $8 million. The first new liner on the Great Lakes in 20 years, the ship was capable of carrying 2,500 passengers and 160 cars and featured full picture windows, five bars, soda fountains, four restaurant, two dance floors, a movie theater, a television theater, a children's playroom, and all the latest marine equipment, including a gyro compass, a radio direction finder, radar, a fathometer, and ship-to-shore phones. Its cruising speed was 22 mph. 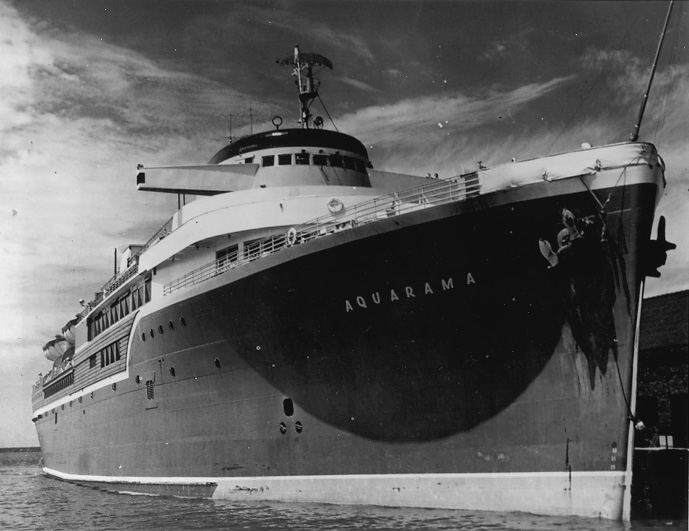 In 1956, the Aquarama, scheduled to operate between Cleveland and Detroit, settled in Chicago temporarily as a floating amusement palace. In the meantime, the Michigan Ohio Navigation Co., which operated the ship, leased Cleveland's West 3rd Street Pier and agreed to spend $152,800 to improve the pier space with ramp and parking space. With a delay in the completion of the pier improvements, the Aquarama did not begin operating until 1957, when it took passengers and their cars from Cleveland to Detroit in about 6 hours. Entertainment on ship was varied, including singers, name bands, dancers, marionette shows, games, and contests. The Detroit-Cleveland service was quite popular, but the ship's massive size, a lack of overnight accommodations, and high operational costs prevented its owners from turning a profit. The Aquarama made its last trip on 4 Sept. 1962 and was berthed in a Muskegon dock until a Canadian company purchased it for $3 million in 1987. The ship was subsequently towed to Windsor, Ontario, where it remained on the shoreline.

In 1994, Empire Cruise Lines bought the ship with the intention of turning it into a floating casino and rechristened it, the Marine Star. It was towed to East End Marina on Buffalo's outer harbor in 1995, where it remained moored for more than a decade owing to legal obstacles encountered by the Empire Cruise Lines. In 2007, the Marine Star was towed out of Buffalo, en route to Aliaga, Turkey for scrapping.