A forerunner to the All-Star Game was held at LEAGUE PARK on July 24, 1911, when the Cleveland Naps took on a team of American League stars in the benefit game for ADDIE JOSS, who had died earlier that year. The game raised $12,914.60 for Joss’ family.

In 1932, Chicago Tribune Sports Editor Arch Ward proposed an All-Star Game the following year in connection with the Century of Progress exposition, and the game quickly became an annual event. CLEVELAND MUNICIPAL STADIUM hosted the third All-Star Game on 8 July 1935. Ironically, it was the only major league game at Cleveland Stadium; the Indians had moved back to League Park the year before.

At the 1935 game, a record crowd of 69,381 watched New York Yankee pitcher Lefty Gomez and Cleveland pitcher Mel Harder hold the National League to just 4 hits, with the American League winning 4-1. Jimmie Foxx of the Philadelphia Athletics drove in 3 runs for the AL, including the game's only home run. 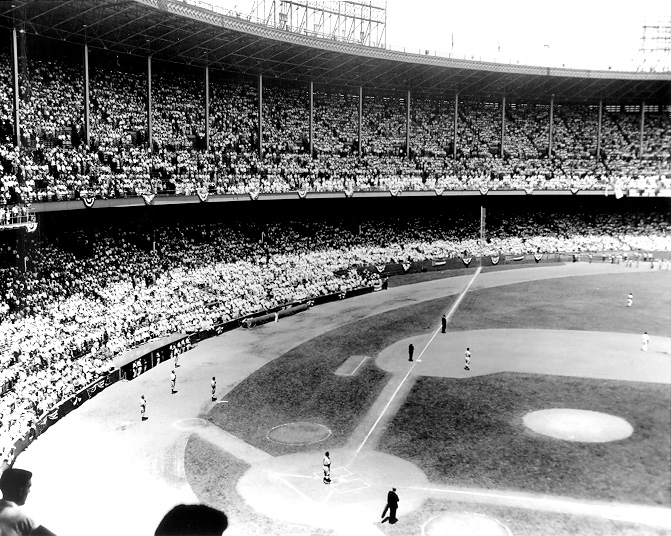 The crowd and players stand for the National Anthem at the 1954 All Star Game held at Cleveland's Municipal Stadium, 13 July 1954. The Sporting News.

Cleveland next hosted the All-Star Game on 13 July 1954. A total of 68,751 fans – another record – saw Cleveland's Al Rosen hit 2 home runs and drove in 5 runs to tie an All-Star Game record, and the AL won 11-9. Washington's Dean Stone entered the game with 2 on and 2 out in the 8th inning with the NL ahead 9-8, and threw out the NL runner trying to steal home. Cleveland's LARRY DOBY tied the score with a home run in the bottom of the 8th, and Chicago's Nellie Fox blooped a single to drive in the go-ahead runs. Virgil Trucks pitched a scoreless 9th inning, preserving the victory for Stone.

A disappointing crowd of 44,160 attended the game, played on 9 July 1963. San Francisco's Willie Mays led the NL to a 5-3 victory by driving in 2 runs, stealing 2 bases, and scoring twice.

In 1979, Cleveland was awarded the 1981 All-Star Game, but a players’ strike in June of that year put the game in jeopardy. The strike was resolved, and the All-Star Game was played at Cleveland Stadium on 9 August 1981, signaling the start of the season’s second half. A crowd of 72,086 crowd – still the record for an All-Star Game – watched the NL win its 10th consecutive victory 5-4. All 5 NL runs came as the result of home runs.

Sandy Alomar Jr. hit a two-run homer in the left field bleachers in the seventh inning to lead the American League to a 3-1 victory at the first All-Star Game hosted at Jacobs Field, on July 8, 1997. Alomar became the first Indian to homer in a major-league All-Star game since Rocky Colavito did so in the Los Angeles Memorial Coliseum in 1959. Alomar became the first Indian ever to win the game's Most Valuable Player award and the first ever to win the award while playing in his home park. The crowd of 44,916 set an attendance record for Jacobs Field.

PROGRESSIVE FIELD is set to host the All-Star Game on 9 July 2019. It will be the sixth time Cleveland has hosted the game – a record for a city with only one MLB team.