BUCHANAN, PAUL STUART (18 Mar. 1894 – 4 Feb. 1974) was an actor, athlete, professor, and advertising executive. Buchanan moved to Cleveland from New York in 1947 to produce THE OHIO STORY radio and TV series sponsored by OHIO BELL TELEPHONE. He also took on directing the radio and television department of McCann-Erickson advertising agency’s offices in Cleveland. He remained in Cleveland for the rest of his life.

The Ohio Story ran state-wide from 1947 to 1955 on radio and 1953 to 1961 on TV. At the time, the filmed series held the record as the longest-running scripted radio and TV program in the nation. In more than 2,500 Ohio Story shows, Buchanan never missed a rehearsal or a program.

Buchanan, the son of a Presbyterian minister, received his undergraduate degree at Wooster College. He taught English and coached basketball at the University of West Virginia, then switched to Florida University, where he is credited with starting the school’s 5000-watt radio station. 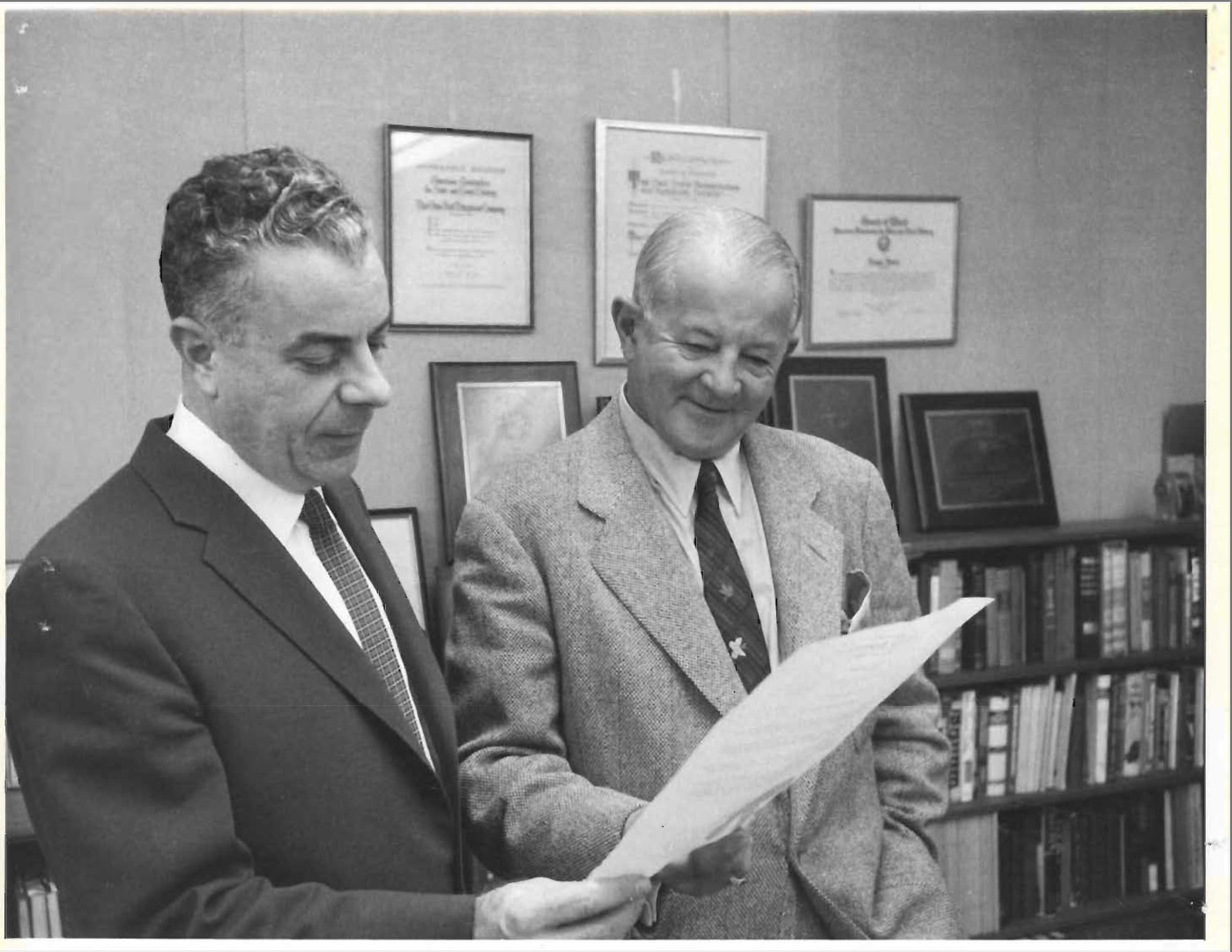 Ohio Genealogical Society Library
“The Ohio Story” radio and TV series was written by Frank Siedel (left) and produced by Stu Buchanan (right). The series ran state-wide from 1947 to 1955 on radio and 1953 to 1961 on TV. At the time, the filmed series held the record as the longest-running scripted radio and TV program in the nation.

He earned a Ph.D. at Harvard before giving up the education business in favor of what he called "making a living." He went to Hollywood and became a character in tough-guy acting roles and took on the job as director of the Pasadena Play House. In May of 1930, he took a job as program director at radio station KHJ in Los Angeles, where he directed episodes of the “Hollywood Hotel” and “Lux Radio Theatre.”

Walt Disney hired Buchanan as a dialogue and casting director at the Disney studios in Hollywood and put him in charge of all foreign versions of Disney productions. Buchanan was the voice of “The Huntsman” in the 1937 Disney animated film “Snow White and the Seven Dwarfs.” His work managing the foreign versions of Disney films took him to Europe and South America to translate “Snow White” into ten languages. Buchanan also had cameo voiceover roles as a flight attendant in “Saludos Amigos” (1942) and “Super-Speed” (1935), and he voiced Goofy in “The Mickey Mouse Theater of the Air” (1938).

In New York radio, Buchanan produced and directed many network shows. He was head of the script department and program supervision for American Broadcasting Co. before coming to Cleveland.

Buchanan worked tirelessly with actors, musicians, and sound technicians to get precisely the right shade of meaning into every sequence. He made actors out of bank clerks, students, and homemakers. Buchanan picked Robert Waldrop, a nationally known radio personality, to narrate the Ohio Story radio series. He convinced Hollywood actor Nelson Olmsted, known for his adaptations of terror tales by Edgar Allen Poe and science-fantasy stories, to commute to Cleveland for seven years to host, narrate and act in the Ohio Story TV episodes and the final two years of the Ohio Story radio series.

In an article in the 25 June 1958 Columbus Dispatch, Buchanan talked about his love and loyalty to Ohio and the “Ohio Story” series: “There has never been – or will be, a radio series that commanded the respect and attention of this state, or, for that fact, the nation. The “Ohio Story” reached its peak in the heyday of radio… the late 1940s. Only one show in the nation had a higher rating … that was the Jack Benny show. I guess of all the things I’ve done in my lifetime, I’m most proud to have had a hand in developing and producing “The Ohio Story.”