THE OHIO STORY RADIO & TV SERIES (1947-1961) was produced for BELL TELEPHONE and ran for 15 years - the record for the longest-running regional scripted program in the nation. When the series ended in 1961, 1,309 radio and 175 TV episodes had been produced.

The series began as a three times a week evening radio show. The first show, “Knowest the Land," introduced what the series would be about: “The Ohio Story then will be a record of achievement, a narrative account of a free and progressive people. Its purpose: to provide good listening, to increase understanding, to promote a respect for the past, an appreciation of the present and a hope for the future. In the weeks and months to come, we hope to earn a regular welcome into every Ohio home. We promise to be a polite and interesting guest.”

FRANK SIEDEL originated the series, and Siedel, BILL ELLIS, Lee Templeton, and other writers from Cleveland-based Storycraft, wrote the scripts. Siedel and Ellis later adapted their best scripts to prose style and published them as books.

STU BUCHANAN, the Series Producer and Director of the Radio and Television Department of McCann-Erickson advertising agency in Cleveland, claimed only one radio show had a higher rating in Ohio - the Jack Benny show.  A 1958 article, '"Ohio Story Keeps on Rolling,” in the Cleveland News, claimed that 18 percent of the households in the state consistently watched it.

For the first five years, The Ohio Story was broadcast live from the WTAM radio studios in Cleveland. In 1952 the radio episode format was changed from 15 minutes to 10 minutes a night, and the shows were pre-recorded for distribution to a state-wide network. 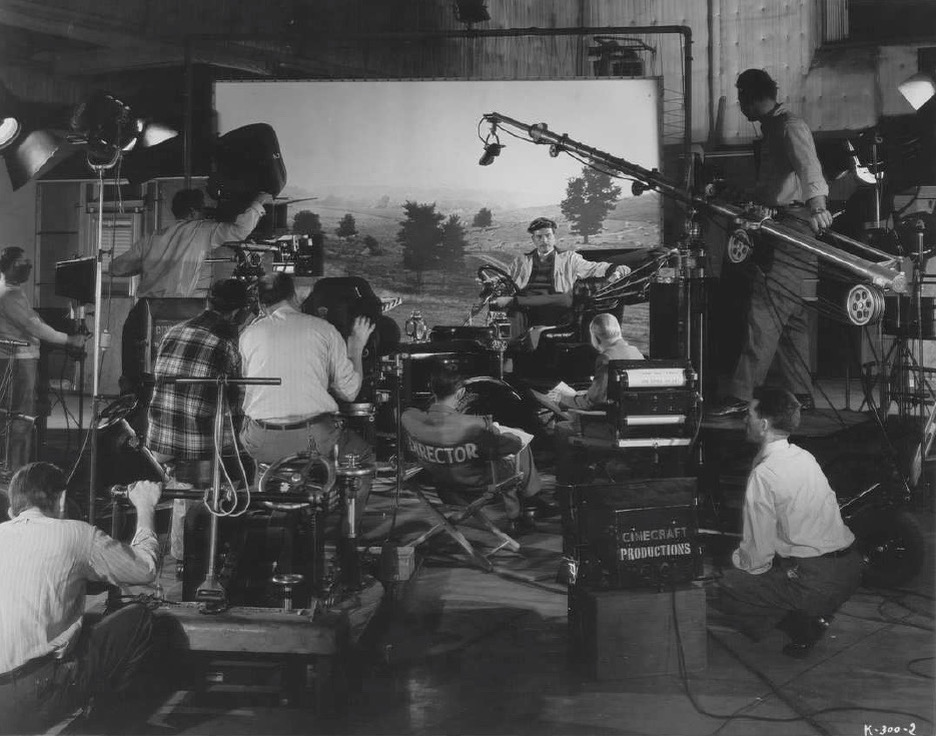 Cinecraft Productions Collection at the Hagley Museum and Library
An Ohio Story TV episode set. Nelson Olmsted is sitting in the antique car in front of a screen projecting the outdoor background. Ray Culley is in the director's chair. Stu Buchanan, the producer, is sitting to Ray's right.

On October 4, 1953, The Ohio Story became a TV series as well. For two years audiences could choose to listen to the series on their radio or watch the series on TV.  The last radio show, "Captain Dodge's Uncommon Courage," aired on December 29, 1955.

The first TV episode, “Lifeline to the Islands,” was the story of Milton "Milt" Hershberger and his small fleet of Ford Trimotor airplanes, which made up Island Airlines. Hershberger provided a vital service to the people living on the islands in Lake Erie, especially in winter when the lake freezes and boats cannot operate.

In the beginning, Robert Waldrop narrated the radio and TV shows and read the short inserted commercial. In 1952, Nelson Olmsted, a California actor, took over most of the narration work for both the radio and TV episodes. The TV shows were directed by Ray Culley of CINECRAFT PRODUCTIONS.

The TV episodes were 15 minutes long and aired once a week, 52 weeks a year. The last TV episode aired on March 18, 1961. Copies of the TV episodes continued to be shipped to schools and libraries for several years after.  Eventually, The Ohio Story came to an end, as television programming changed.

Actors from the CLEVELAND PLAY HOUSE and notable celebrities acted out the parts. For example, Alan Alda of the TV show, M.A.S.H., played a Native American in an episode about the siege of Fort Meigs during the War of 1812. Alda was in summer stock at the Play House at the time. American television show host, singer, and media mogul Merv Griffin played Stephen Foster in the “Beautiful Dreamer” episode.

In “Ohio Story Turns Out Total of 2,500 scripts,” an article in the January 19, 1958, Columbus Dispatch, Siedel talked about where he got his ideas. [Note: the actual number of radio scripts was 1,309 and TV scripts was 175, but with repeated episodes, the number of total episodes aired may have been 2,500.] “There are nearly 9 million people in Ohio, and every one of them is worth a story. Most of our leads, though, are more obvious if you keep your eyes open. One of the best leads is the plaques you see in public buildings. Usually, they go unnoticed by the passerby, but they were put up there for a reason. Generally, there's a story behind them."

The Hagley Library is digitizing The Ohio Story TV programs and scripts. Click here to access the Library database.