CENTRAL ARMORY was erected in 1893 at Lakeside Ave. and Miami St. (now E. 6th St. opposite the present city hall. Built by the county to house units of the National Guard, it was also used for public events. For the 1896 centennial celebrations, it housed mass meetings, a concert and historical spectacle, gymnastic exhibitions by GERMAN, CZECH, and Swiss groups, and a floral exposition. By 1909 it provided additional exhibition space for the INDUSTRIAL EXPOSITION, being connected by a bridge to the temporary exhibition hall north of Lakeside. In 1916 Charles Evans Hughes addressed an audience in the armory during his presidential campaign. The Central Armory was designed by Cleveland architects LEHMAN & SCHMITT and was essentially a large covered hall. The 122' width was spanned by 6 arched plate girders, with a balcony suspended from the girders by iron rods. The exterior was constructed of stone in a castellated Gothic style derived from fortress-like medieval Italian municipal buildings. The Central Armory was demolished in 1965; the site is occupied by the Anthony J. Celebrezze Federal Office Building. 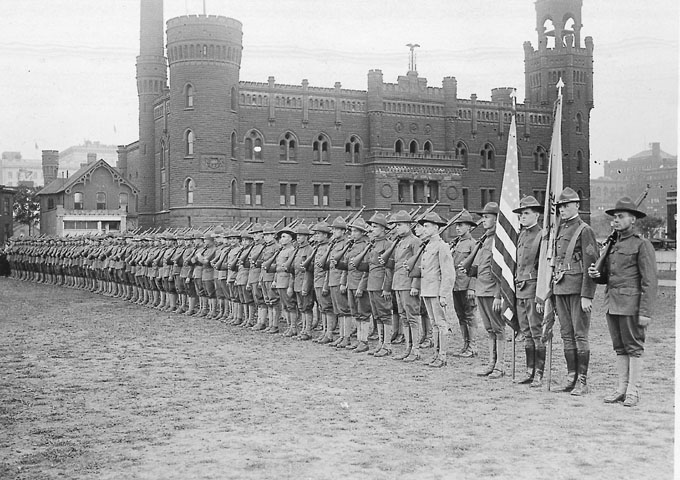