The CENTRAL VIADUCT, built between 1887-88, was a high-level bridge that linked the east and west sides of Cleveland. It stood where the Innerbelt Bridge (I-90) is now located. In Mar. 1879 Councilman Jas. M. Curtiss introduced a resolution asking that the city engineer undertake to determine the best site for a bridge linking downtown with neighborhoods southwest of Cleveland across the CUYAHOGA RIVER. Central Viaduct The resolution met with some opposition and was not passed until 1883. The council authorized an expenditure of $1 million, and ground was finally broken in May 1887. The city engineer's office furnished the design and construction specifications, and the KING IRON BRIDGE & MFG. CO. was contracted to do most of the construction. Opened on 2 Dec. 1888, the Central Viaduct consisted of 2 bridges. The first structure, known as the Central Viaduct, was 2,839' long and extended from Jennings Ave. (W. 14th) to Central Ave. (Carnegie). Known as a "stilt" type, the bridge consisted of a series of braced towers and deck spans of varying lengths. Originally it had a swing section over the river to allow taller ships to pass, which was replaced in 1912 with an overhead truss. The roadway was approx. 100' above the river. On the night of 16 Nov. 1895, a safety switch failed while the draw was open, causing a streetcar to plunge into the river; 17 people were killed. Closed as unsafe in 1941, the main bridge was razed for scrap iron during World War II. The second bridge, known as the Walworth Run section, was 1,088' long and connected Abbey Ave. to Lorain Ave. at W. 25th. It continued in use until 1986, when a new Abbey Ave. bridge was begun to replace it. 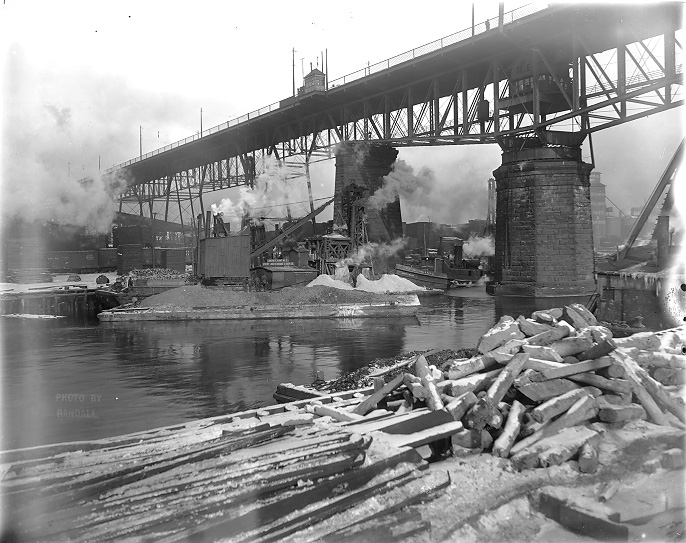