The CLEVELAND AGREEMENT was a memorandum of understanding that was concluded in Cleveland in 1915 between CZECH and SLOVAK national organizations in the U.S. The landmark document served as a fundamental stepping stone toward the formation of the future nation of Czechoslovakia in October 1918. It was signed on October 22 and 23, 1915 in Cleveland’s BOHEMIAN NATIONAL HALL, at 4939 Broadway Ave., by the representatives of both the Bohemian National Alliance, representing the Czechs and headquartered in Chicago, and the Slovak League of America, founded in Cleveland and headquartered in New York.

The agreement emerged amid the backdrop of WORLD WAR I. Cleveland was home to large communities of Czech and Slovak immigrants who had fled anti-Slavic oppression in the dual monarchy of Austria-Hungary. Both peoples shared similar languages and cultures associated with their Slavic roots, and both maintained ethnic organizations and newspapers in the city. The weakening and eventual dissolution of Austria-Hungary amid the war fueled their common dreams for independence. The idea of combining Czech and Slovak efforts was first presented by Tomáš G. Masaryk, the celebrated Czech statesman and philosopher, whose mother was Slovak, and father was Czech.

Although the Pittsburgh Agreement of 1918 is often cited as the turning point, it was a ceremonial formalization of three years of collaborative work by Czech and Slovak activists in America. The Cleveland Agreement of 1915 served as the foundation for their planning efforts. In the agreement, the delegates pledged to work in unison to form a free, independent, and unified state for the Czech and Slovak peoples. Cleveland was selected as the site for the agreement conference, not only because it had significant populations of both nationalities, but also because of its central location relative to other large population centers, such as New York, Pittsburgh, Chicago and St. Louis. Cleveland also offered a sizable and prestigious facility for such a historic meeting – the Bohemian National Hall.

The conference was opened by the president of the Slovak League, Albert Mamatey, whereupon the following officers were elected to preside over the conference: Mamatey as Chairman, Emanuel Voska as Vice-Chairman, Dr. Stefan Osusky as the Slovak Secretary, J. Martinek as the Bohemian Secretary.  It is important to note that each party had a secretary to record the proceedings – trust was still at premium.  The result of this conference was a proclamation that included these five fundamentals:

1. Independence of the Czech and Slovak lands from Austria-Hungary

2. Federal union of the Czech and Slovak nations with full autonomy for Slovakia, including its own government, free use of the Slovak language, and cultural independence.

4. A democratic representative form of government, similar to that of the United Kingdom.

5. That the above mentioned items form the basis of mutual agreement and can be altered only by the agreement of both parties.

Subsequent points illustrate that the Cleveland Agreement was a working document that provided the framework for further Czech and Slovak efforts, leading to eventual Czechoslovak statehood. For example, it specified that “in all public demonstrations and all common actions, the name to be used [for the common Czech and Slovak organization] is ‘The Executive Committee of the Bohemians and Slovaks in America’ [Vykony Vybor Cechu a Slovaku v Americe].” It articulated the ways in which the group would be organized, how fundraising would proceed, and how information would be disseminated.  The document itself did not represent an official document to be framed and displayed; the meeting minutes of the conference embodied the agreement.

The Cleveland Agreement represented the first accord between the Czech and Slovak peoples and formed a starting point toward the path of independence for both nationalities. It served as the basis for extensive fundraising to support the Czecho-Slovak National Committee in Paris, for negotiations with the Allies, and for lobbying in the U.S. Congress.  Three years later, the principles of the agreement were augmented by the Pittsburgh Agreement of May 31, 1918. The latter became the call for an independent Czechoslovakia, which materialized later that year on October 28, 1918. 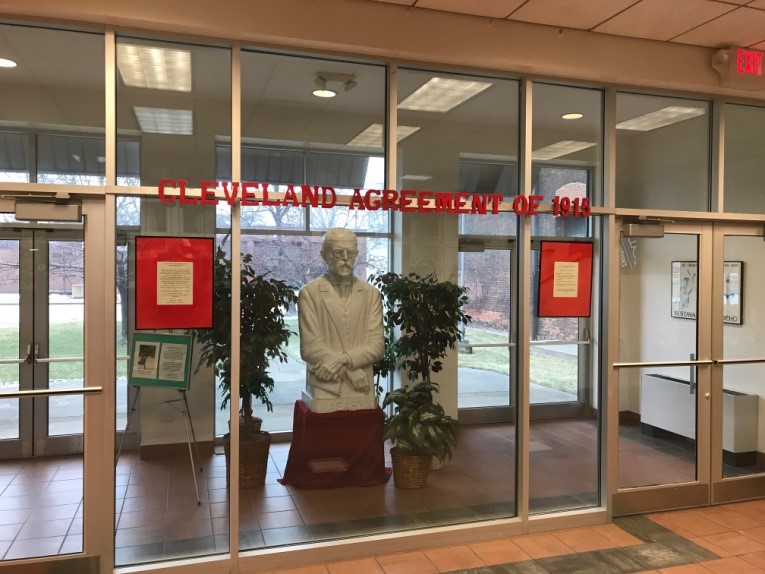 The memory of the Cleveland Agreement is still honored by the Czech, Slovak, and RUSYN communities of Greater Cleveland. In October 2018, on the occasion of the 100th anniversary of Czechoslovakia’s independence, the lobby of the Bohemian National Hall, now known as the Czech Cultural Center of Sokol Greater Cleveland, was dedicated in honor of the agreement. It features the statue of Tomáš Masaryk, the founder and first President of Czechoslovakia.