WORLD WAR I. With a population of 560,665 on the eve of World War I, Cleveland stood as the 6th-largest city in the U.S. It thrived economically on the manufacture of iron and steel, paints and varnishes, foundry and machine-shop products, and electrical machinery and supplies. Although recently surpassed by Detroit in automobile production, it still excelled in the making of auto accessories. Proof of the city's financial importance was offered late in 1914, when Cleveland was selected as headquarters for the 4th Federal Reserve District (see FEDERAL RESERVE BANK). The years of U.S. neutrality were bonanza ones for Cleveland's industries, as its workers satisfied contracts for uniforms, weapons, automobiles and trucks, and chemicals for explosives. By the fall of 1918, it was estimated that the city had produced $750 million worth of munitions in the 4 years since the war had begun. The issues of the war itself were primarily of interest to the 35% of the city's population (1910 census) of foreign birth. War touched the city more directly with the sinking of the Lusitania on 8 May 1915, as 7 Clevelanders were listed among the 114 Americans killed on the torpedoed British liner. By the time Germany resumed unrestricted submarine warfare in Mar. 1917, Clevelanders were packing war meetings in GRAYS ARMORY and aiding the U.S. Naval Reserve in the formation of Lake Erie's "mosquito fleet" of 500 ships.

Upon America's entry into the war on 6 Apr. 1917, a county draft board consisting of DANIEL E. MORGAN, STARR CADWALLADER, and Dr. Walter B. Laffer was named to supervise the local application of the new Selective Service System. By the year's end, 25,000 draftees had joined 8,000 volunteers in the area's total of men under arms. By war's end, almost 41,000 Clevelanders had joined the services; 1,023 of them were killed in the conflict. Led by Maj. GEO. W. CRILE, Base Hospital Unit No. 4 from Lakeside Hospital had been among the first Americans to reach France, as early as May 1917 (see LAKESIDE UNIT). On the home front, Cleveland factories continued to supply the war effort with arms and equipment. The WHITE MOTOR CO. alone produced a total of 18,000 trucks for the use of the U.S. and its allies. As men stepped into the trenches and assembly lines, women were called upon to fill the breach. The CLEVELAND PUBLIC SCHOOLS dropped an old ruling that forced female teachers to resign upon marriage. Gertrude Nader greeted Cedar-Fairmount line commuters in 1918 as Cleveland's first streetcar "conductorette," although the female conductors would later lose their jobs as the result of a postwar strike.

To coordinate the city's war activities, Mayor HARRY L. DAVIS appointed a MAYOR'S ADVISORY WAR COMMITTEE to be financed from money from the Red Cross drive. Supervised under the umbrella of the Mayor's Committee were such activities as the war gardens campaign, the "Four Minute Men" speakers' bureau, and local efforts in the Treasury Dept.'s Liberty Loan drives. Clevelanders oversubscribed the first 2 Liberty Loan campaigns by $70 million. Nothing was deemed too excessive in the city's desire to flaunt its patriotism. The Board of Education honored one of America's allies by naming a new elementary school after Lafayette. A 1918 Flag Day Pageant in WADE PARK, witnessed by 150,000 Clevelanders, featured a SPIRIT OF '76 tableau personally directed by ARCHIBALD M. WILLARD. On the negative side, a local branch of the American Protective League was organized to aid the Dept. of Justice in locating draft "slackers," investigating food hoarding, and suppressing alien disturbances. Some violators of the city's first "gasless Sunday" in Sept. 1918 returned to their cars to find the tires slashed. 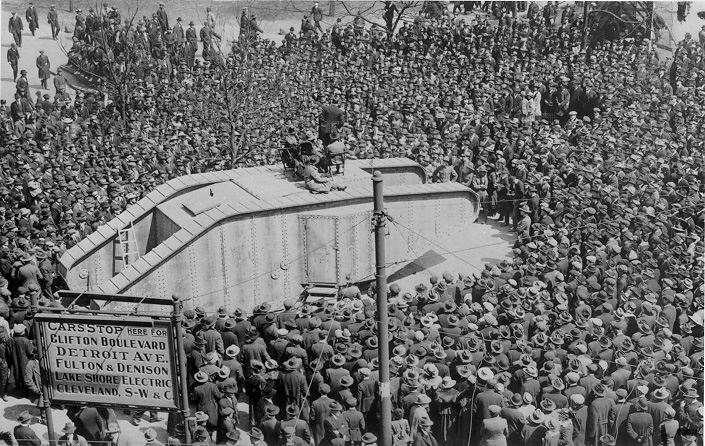 Crowds surround an allied tank on exhibit during a World War I Liberty Loan drive on Public Square, July 1918. WRHS.

Despite the outward appearance of 100% Americanism, there were those who objected to the U.S. entry into the war. Members of the city's German and Hungarian communities had hoped for continued neutrality, as did many IRISH, who saw any assistance to the Allies as helping their traditional enemy, the English. Radical political groups, including some Socialists, also advocated neutrality. Socialist Eugene Debs's criticism of the war resulted in his arrest in Cleveland and subsequent imprisonment in 1918 (see DEBS FEDERAL COURT TRIAL). Cleveland's ethnic communities—"hyphenated Americans" in the parlance of the day—came in for their share of patriotic pressure. An Americanization Board was established by the Mayor's Advisory Committee, and naturalization classes were inaugurated under the direction of Dr. RAYMOND MOLEY (see AMERICANIZATION). With the cooperation of the Cleveland Board of Education, free language classes were advertised in 24 different locations. Some ethnic newspapers began printing editorials in English to circumvent a law requiring the filing of translations of war-related copy with the local postmaster.

A particularly intense trial was reserved for the city's 132,000 residents of German extraction. The German language was dropped from the curriculum of the public elementary schools, although its study was retained on grounds of "military necessity" in the high schools. Local members of the American Protective League, in fact, campaigned to outlaw even the public use of the "enemy" language. Directors of the German American Savings Bank wisely voted to conduct future business under the less provocative nomenclature of the AMERICAN SAVINGS BANK. So many obstacles were raised for Cleveland's German newspaper WAECHTER UND ANZEIGER that one scholar found it surprising that the paper survived the war at all. Not so lucky was the German-American president of BALDWIN-WALLACE COLLEGE, Arthur Louis Breslich, who aroused the patriotic indignation of his students and faculty at the 1917 Christmas service by attempting to lead them in the singing of the German-language version of "Silent Night." Following protests, petitions, and parades against the president's "passive" patriotism, Dr. Breslich was permanently suspended from his duties by the Baldwin-Wallace trustees. While the war could not end too soon for the city's German-Americans, its hysteria lingered months beyond Armistice Day for most Clevelanders. Thanks to a premature story appearing in the CLEVELAND PRESS, Cleveland celebrated the famous "false armistice" on 7 Nov., as well as the real one 4 days later. More than half a million people still flocked to the Allied War Exposition on the lakefront the following week, where they witnessed a simulated battle and toured 3 mi. of trenches. Even Cleveland's MAY DAY RIOTS of 1919 can be attributed at least partly to the smoldering embers of World War I patriotism.

Although Cleveland joined in the nation's desire to return to "normalcy," the war had left it changed in at least one major respect. It effectively blocked the flow of immigration from Europe to the nation's urban centers, a change that would be institutionalized in the restrictive immigration legislation of the 1920s. To fill the resultant labor shortages in the country's war industries, employers turned to the disaffected African American population of the South. Partly as a result of active recruitment and partly from word-of-mouth advertisement, Cleveland's black population grew by 308%, from 8,448 to 34,451, in the decade ending in 1920 (see AFRICAN AMERICANS). One of the local black newspapers, the CLEVELAND ADVOCATE, began a special "Industrial Page" to assist in their adjustment. Unlike their predecessors, who had tended to come from the border states and live in close proximity with other groups, the new arrivals were more likely to come from the Deep South and settle in areas of dense black concentration. "In the midst of a city that had once been proud of its integrationist tradition," observed historian Kenneth L. Kusmer, "a black ghetto was taking shape." World War I thus marked the end of Cleveland's second demographic era, which saw the original New England stock leavened by the influx of the New Immigration. It ushered in a period of transition in which the European immigrants were to be assimilated and succeeded by a third wave of newcomers from the American South.