The CLEVELAND CALL & POST rose from somewhat obscure origins to become long Cleveland's major African American newspaper. It was created from the 1927 merger of 2 struggling weeklies, the Call and the Post. The Call was founded ca. 1920 by a group that included local inventor GARRETT A. MORGAN. At about the same time, the Post was established as the organ of a fraternal group known as the Modern Crusaders of the World. Even after its self-described "marriage of misery," the Call &amp Post continued to flounder until the arrival in 1932 of WM. O. WALKER, a black businessman from Baltimore. Over the following decade, Walker nursed the Call &amp Post's size from 4 to 12 pages and its circulation from 300 to 10,000. He also acquired most of the paper and formed a partnership, the P-W Publishing Co., with attorney LAWRENCE O. PAYNE in 1940. 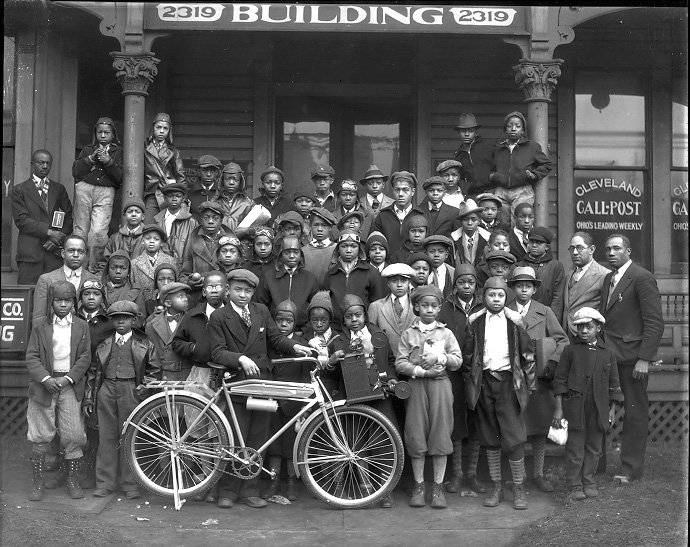 Part of the Call &amp Post's success may have stemmed from the sensational treatment of violence on its front page, a practice excused by some defenders on the basis of the paper's heavy dependence on over-the-counter sales. That was balanced by the paper's unrivaled coverage of the African American community's religious and social news. Politically, the Call &amp Post combined frequent support of local black Democrats with generally Republican preferences on the national level. In 1959 the Call &amp Post moved from its long-time address on E. 55th St. to its own building on E. 105th at Chester Ave., where the paper became one of the first in Ohio to convert to offset printing. Separate editions were added for Columbus, Cincinnati, and statewide. On 20 Jan. 1983, the weekly's traditional Saturday publication date was moved up to Thursday. Following Walker's death in 1981, Harry Alexander (see WILLIAM HARRY ALEXANDER) and John H. Bustamante became copublishers. After 1990, John Bustamante continued as publisher under the ownership of Andre Bustamante. A recipient of several Russwurm Awards, the Call &amp Post numbers CHAS. H. LOEB, Jas. L. Hicks, Wm. (Sheep) Jackson, and John Fuster among its former staffers. In 1995, with 46 employees and a circulation of approx. 35,000 but struggling financially, the paper filed for Chapter 11 bankruptcy protection. The paper sold its printing press in 1996, and its 105th Street building was auctioned off in 1997. However, the 1998 purchase of Call &amp Post by boxing promoter Don King encouraged hopes for the papers renewed success. Since then, King has served as publisher as well as owner. Call &amp Post now has Cleveland headquarters at 11800 Shaker Blvd.