CLEVELAND CITY HALL, dedicated in 1916, was the first such structure specifically built for and owned by the city. The earliest township government met in 1803 in a log cabin belonging to JAS. KINGSBURY. When the village was incorporated in 1815, a small frame building on Superior Ave. erected by Jas. Walworth was used as the village hall. In 1836 the city government was conducted in the Commercial Block on Superior near the west side of PUBLIC SQUARE. In 1856 it moved to rented quarters in the Jones Block on the southwest corner of the square. In 1869 a competition for a plan for a new city hall was held, although none of the resulting plans were built. In 1875 the city leased the Case Block, a large commercial building at Superior and E. 3rd St., which it purchased in 1906 and continued to occupy until the completion of the present building. City Hall (Case Block) In 1895 a city hall was approved by the voters, and a colossal Beaux-Arts building was planned for the 2 northern quadrants of Public Square, with an elliptical arch spanning Ontario St. Ground was actually broken on 4 June 1895, but protests against building on the public land brought the project to a halt within a week. 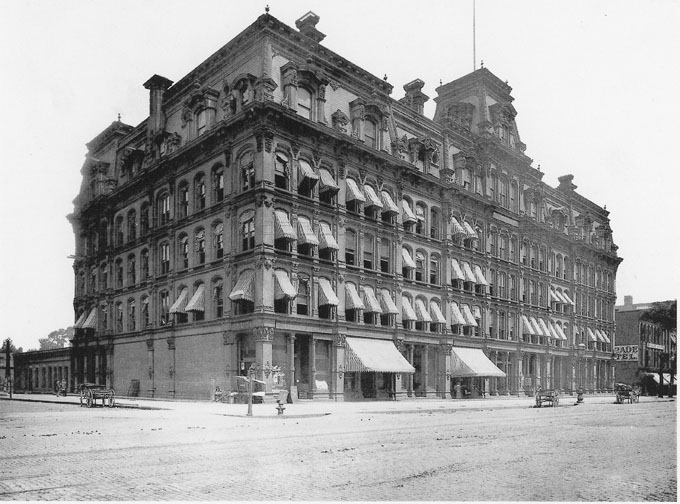 Cleveland City Hall as it appeared in the 1880s. WRHS.

The present city hall was erected as part of the 1903 Group Plan ensemble of public buildings. Placed in symmetry with the county courthouse at the north end of the Mall, the city hall has an arcaded ground story, a 2-story Tuscan colonnade, and a central entrance bay characteristic of the Beaux-Arts style. The architect was J. MILTON DYER. Designed by 1907, the city hall was completed and dedicated on 4 July 1916. The building has a steel-frame and concrete structure with exterior walls of Vermont granite.

The Council Chambers underwent major restorations in 1951 and 1977. In 1994 a major exterior renovation costing $2.9 million took place for the first time in the building's history. The vaulted 2-story great hall is an impressive public space, and the commodious and workable arrangement of the interior has enabled the building to function well as a city hall for 80 years.