The CLEVELAND GATLING GUN BATTERY was an independent military organization formed in June 1878 by prominent Clevelanders concerned about the maintenance of law and order in the face of increasing labor disorders. Although placed on alert several times, the unit was never called into action. A citizens' committee to plan for the battery began after the strikes of 1877. Using contributions, the committee purchased 2 Gatling guns and then issued a call for volunteers. At a meeting in the mayor's office, the Cleveland Gatling Gun Battery was established with 25 charter members, including Major Wilbur F. Goodspeed, elected captain; 1st Sgt. Thomas Goodwillie; 2d Sgt. Leonard C. Hanna (captain, 1882-93); 3d Sgt. John R. Ranney; and Quartermaster J. Ford Evans. On 6 Mar. 1880 the Ohio legislature enacted a bill authorizing Cleveland citizens to establish a Gatling gun battery, placed it under control of the mayor in emergencies, and made it subject to the regulations governing Ohio National Guard units. The unit was incorporated on 17 May 1880. An armory was constructed at E. Prospect and Sibley (3433 Carnegie). In 1885 the battery had 2 guns, 80 sabers, and 1 revolver. It billed the city $242 for the services of its members on guard during the iron workers' strike at Newburgh, 8-13 and 17-21 July 1885. The majority of the unit's activities were social events; its annual target practice, for example, included dances and was held at such resorts as St. Clair Springs, MI, and Chautauqua Lake, NY. 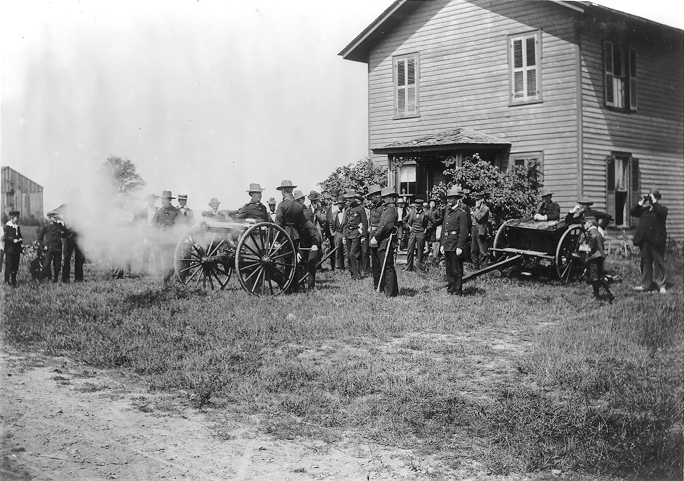 In June 1897 the battery charter was amended. Its new purpose became maintaining the battery's property and promoting among members "reciprocal feelings of mutual benefit and social intercourse" and "the spirit of military excellence." The battery was briefly reestablished as an independent military unit in 1900, but in Feb. 1905 the members voted to dispose of its property. In Apr. 1924 the armory site was sold to Troop A for $33,000.