CLEVELAND RECORDING CO., founded by radio announcer FREDERICK C. WOLF in the 1930s, was Cleveland's first professional recording studio and one of the longest operating independent recording studios in the United States. Wolf began recording his Sunday morning Czechoslovakian music programs on RADIO station WGAR around 1936. CRC StudioHis fellow nationality program announcers availed themselves of his disc recording services to record their programs, and by 1938 he was recording local Slovenian band leader and future "Polka King," Frankie Yankovic (see POLKAS). By the time Wolf incorporated Cleveland Recording Co. on 14 November 1946, he had acquired a broad clientele including NACA (see NASA LEWIS RESEARCH CENTER), Eaton Axle (see EATON CORP.), most of Cleveland's top advertising agencies, and a wide range of musicians. In 1946, Cleveland Recording outgrew its offices in the Carnegie Hall building at 1220 Huron Road, and moved to the Loew's State Theater building at 1515 Euclid Ave. On May 1, 1950, Wolf opened radio station WDOK in the same location and hired a young Navy veteran, Ken Hamann, as an engineer for both the radio and the recording studios. Hamann became chief engineer of Cleveland Recording in 1956 and over the next decade, in addition to engineering award-winning remote broadcast recordings of the yearly BACH FESTIVAL and Oberlin College Contemporary Music Festivals, helped build the studio into a state-of-the-art recording and mastering facility in which many regional and national hit records were produced. These included the Outsiders' "Time Won't Let Me," the Human Beinz' "Nobody But Me," the Lemon Pipers' "Green Tambourine," and albums by the James Gang and Grand Funk Railroad. In 1970, Ken Hamann and production engineer John Hansen purchased Cleveland Recording Co. from Wolf. A proposed demolition of the building (later halted by the formation of the PLAYHOUSE SQUARE Assn.) forced them to move the studio a few blocks east to the former Luby Chevrolet dealership at 1935 Euclid Ave. Their renovation of the site earned them a design award from the PLAIN DEALER. Hamann and Hansen decided to sever their partnership in 1977 when the purchase of their property by CLEVELAND STATE UNIVERSITY forced another move. Hamann opened Suma Recording Studio in Leroy Township, east of Cleveland, and Hansen continued to operate Cleveland Recording at a new location on Euclid Ave., focusing on commerical recording until his death in 1990. 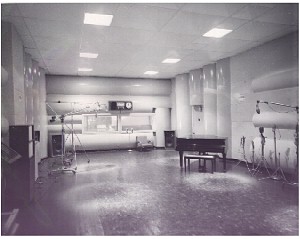