The CLEVELAND UNION TERMINAL and Terminal Tower, Cleveland's most familiar landmark, was the largest construction project of the 1920s in the city. Originally intended for the north end of the MALL, the railroad terminal was located on PUBLIC SQUARE by ORIS P. AND MANTIS J. VAN SWERINGEN following a public referendum in 1919. Excavation of the site began in 1924. The entire depot and office complex was designed by Chicago architects Graham, Anderson, Probst & White. The unprecedented engineering for the project included foundations 250' deep for the tower, the demolition of more than 1,000 buildings, and the construction of many bridges and viaducts for the railroad approaches. Construction on the steelwork began in 1926, and the 708' Terminal Tower was completed in 1927, the tallest building in the world outside New York City until 1953 and in the United States until 1967.

The first train entered the depot on 23 Oct. 1929, and the formal opening of the terminal group, including the Guildhall, Republic, and Midland buildings across Prospect Ave. (now Landmark Office Towers), took place on 29 June 1930. The complex also includes the Hotel Cleveland, which was built in 1918 (see STOUFFER RENAISSANCE HOTEL), Higbee's (see DILLARD'S DEPT. STORES, INC.) Dept. Store (1931), and the U.S. Post Office, completed in 1934. The area occupied by the depot and the air-rights buildings covers 17 acres. A distinctive feature of the terminal was the amount of commercial space on the concourse level. 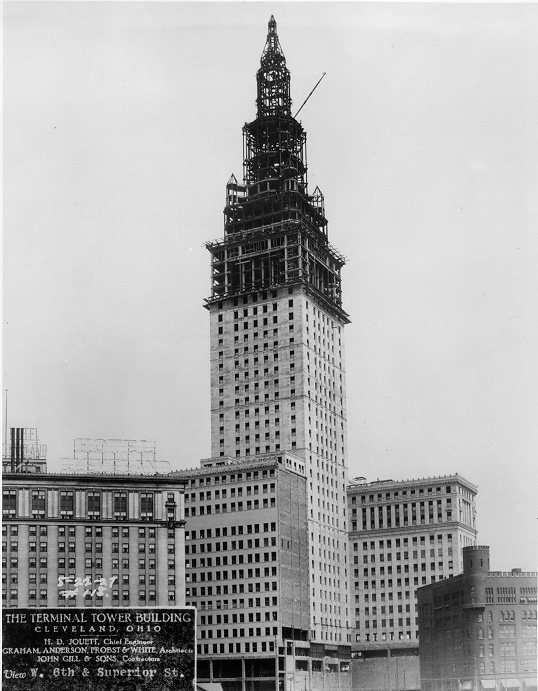 The terminal was used by the New York Central, NICKEL PLATE ROAD, Big Four, Erie, and Baltimore & Ohio railroads, but the Pennsylvania Railroad continued to use the old lakefront depot. The height of train service through the terminal was during World War II. The station was also the main terminal for the SHAKER RAPID TRANSIT, and in 1955 for the crosstown RTA rapid line. In 1976, a Vietnam veteran and employee of the Chessie System held several executives of his company hostage in Terminal Tower to protest the company's refusal to honor agreements made to veterans like himself regarding leave of absence and apprenticeship pay.

The last passenger service left the terminal in 1977. The Lausche State Office Bldg. was erected on the northwest corner of the terminal air-rights area in 1979. Following removal of postal operations in 1982, the post office building was converted into the headquarters of the M. K. Ferguson Co. The Terminal Tower and station were acquired by Forest City Enterprises for redevelopment at the same time. TOWER CITY CENTER, part of a $400 million development, consisting of a 3-level shopping mall in the old steam concourse, flanked by a new office tower and Ritz-Carlton Hotel, opened in 1990. Renovation of the complex was directed by the Dallas-based architectural firm of RTKL. That year, the CLEVELAND ORCHESTRA, began playing Fourth of July concerts in front of the tower.

In 2010, FOREST CITY finished a 40 million dollar, multi-year renovation of Terminal Tower which restored the building's terracotta facade, upgraded exterior lighting and windows with energy efficient products, and re-opened the observation deck for the first time since the September 11th Terrorist attacks in 2001.

In 2021, Jack Entertainment, the company controlling Jack Cleveland Casino, leased out 15,000 square feet of space in Terminal Tower. The regional headquarters of the company are, as of 2022, on the 16th and 17th floor of the tower.