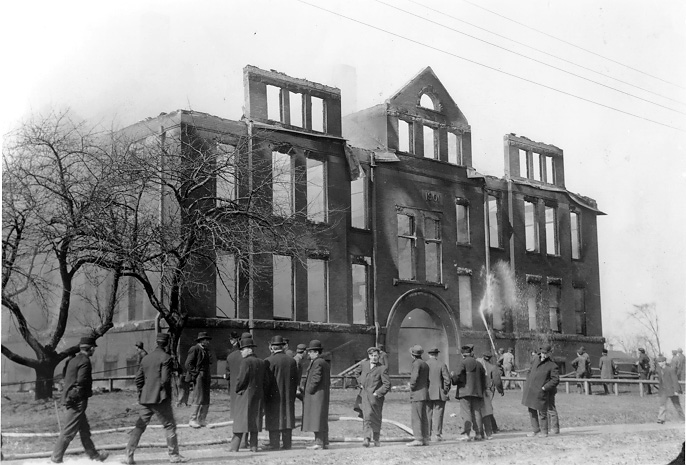 The COLLINWOOD SCHOOL FIRE occurred on 4 Mar. 1908, killing 172 children and 2 teachers at Lakeview Elementary School in the village of COLLINWOOD. The fire began shortly after 9 a.m when an overheated steam pipe came in contact with wooden joists under the front stairs, and only 194 of the 366 students enrolled escaped the blaze. The others were trapped inside the rear first-floor exit, and by the time volunteer firemen arrived, nothing could be done to save them. Nineteen bodies could not be identified and were buried in a common grave in LAKE VIEW CEMETERY, along with 150 students whose identity was known.

The initial report claimed that the rear doors of the school opened inward, and the children were unable to open them because they were jammed against the doors by the other panic-stricken children pushing from behind. Both the coroner's inquest, which included reports from witnesses and the architects who designed the building, and a physical examination of the building proved that the outer doors did open outward in accordance with the law at that time. The report on the fire concluded that the children's failure to escape resulted from their own panic. The fleeing children became wedged tightly on the stairs behind a set of inner vestibule doors which were narrower than the outer doors. The horror of the Collinwood fire caused numerous school inspections across the country, which resulted in stricter laws.

Neil, Henry. Complete Story of the Collinwood Disaster and How Such Horrors Can Be Prevented (1908).