The CUYAHOGA BUILDING was one of 3 office buildings in Cleveland (the others being the Society for Savings Bldg. and the WESTERN RESERVE BLDG.) designed by Burnham & Root or Daniel H. Burnham & Co. of Chicago. Cuyahoga BuildingErected on PUBLIC SQUARE in 1892-93, the 8-story building was the last of the three, a fine example of the Chicago-style office building and the first in Cleveland with a complete structural steel frame. It was built by MYRON T. HERRICK and Jas. Parmalee and housed the offices of Herrick. TOM L. JOHNSON had his office in the building, and the CLEVELAND ELECTRIC ILLUMINATING CO. was a major tenant. The corner drugstore was occupied in turn by Meyer & Gleim, E. R. Selzer, and Schroeder's Drugs. The latter evolved into Schroeder's Bookstore, a long-time fixture on the Square. When the Cuyahoga was demolished for the site of the BP America building in 1982, the arched terra cotta entrance facing Superior Ave. was dismantled and reassembled as part of the facade of the WESTERN RESERVE HISTORICAL SOCIETY library building. 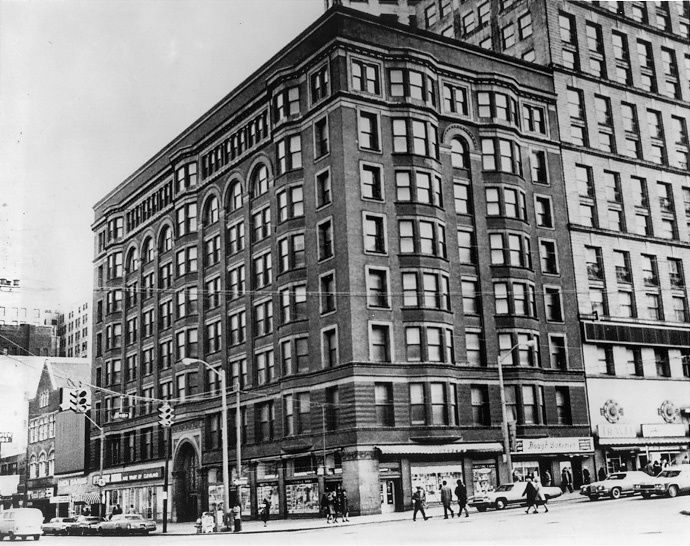 The Cuyahoga Building on Public Square, designed by Daniel H. Burnham and erected in 1893, was placed on the National Register of Historic Places in 1975. Cleveland Press Collection, CSU Archives.
Article Categories
Architecture