The CUYAHOGA RIVER divides the east and west sides of Cleveland. It originates in springs in the highlands of Geauga County, in the adjoining townships of Hambden and Montville. The 2 sources, forming the East and West branches of the river, are 35 mi. east of Cleveland. The river flows southwest to Cuyahoga Falls, on the northern edge of Akron, where it drops into a large, deep valley and turns sharply north, thus forming the letter U with its 80-mi. course. Upon reaching Cleveland, about 6 mi. from its mouth, it becomes a sharply twisting stream before emptying into Lake Erie. It is believed that the Mohawk Indians meant "crooked river" when they called it "Cayagaga," although the Senecas called it "Cuyohaga," or "place of the jawbone." Originally the old river bed's last bend took the mouth westward along the lakeshore to Weddell St. (now W. 54th St.), until the present mouth was dug in 1827 to form WHISKEY ISLAND and a more direct channel which leads straight into Lake Erie. The OHIO & ERIE CANAL paralleled the Cuyahoga between Akron and Cleveland. The business district of the early city fronted on the river, where steamers, schooners, and canal boats exchanged imported goods for the products of local industry. In the 1850s and 1860s, shipyards lining the old ship channel on the west side turned out hundreds of vessels of all classifications. 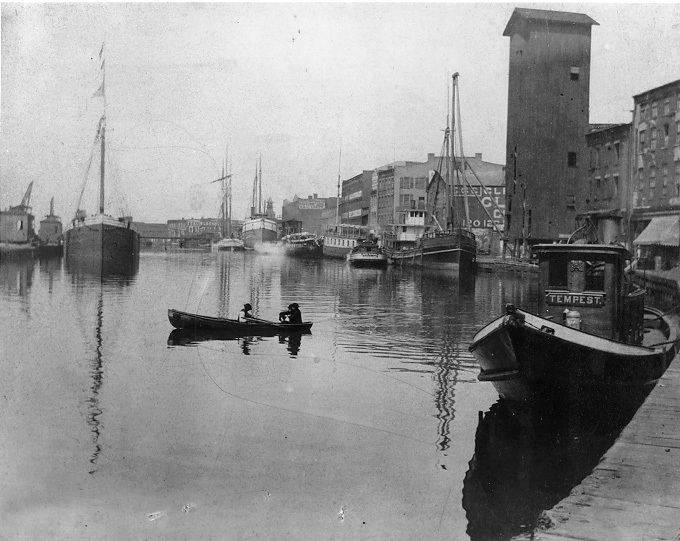 A view of the Cuyahoga River, looking north from the riverbank at Superior Ave., 1870. WRHS.

Industry had claimed virtually all of Cleveland's riverfront by 1881, when the discharge from factories and oil refineries made it, according to Mayor RENSSELAER R. HERRICK, "an open sewer through the center of the city." With federal assistance, the river mouth was widened beginning in 1898, and beginning in 1936 the river was widened and the channel deepened so that 600' freighters could navigate safely. The challenge of communication between the east and west sides of the city has necessitated the construction of dozens of BRIDGES over the years. On 22 June 1969, a burning oil slick floating on the river caused extensive damage to 2 railroad trestles at the foot of Campbell Rd. Hill. Although oil fires were nothing new on the Cuyahoga, this one received national attention, and Time magazine (1 Aug. 1969) branded the Cuyahoga as one of the most polluted rivers in the U.S. Water quality improved over the next decade with the construction of sewer interceptors and wastewater-treatment plants, and remedial measures taken by industry in response to lawsuits brought by the U.S. attorney and others. In 1982, reflecting increasing development of the FLATS as an entertainment destination, the Lake Erie Marine Trades Assn. organized a "Venetian Nights Parade" of boats on the river. In time this evolved into the Riverfest (1984), the Flatsfest (1992), and finally the River Expo (1994), which have attracted crowds of up to 250,000.