EATON, CYRUS STEPHEN (27 Dec 1883-9 May 1979), a noted businessman and philanthropist who promoted better U.S.-Soviet relations at the height of the Cold War.  He was born in Pugwash, Nova Scotia, son of Joseph H. and Mary A. (McPherson) Eaton. A graduate of McMaster University (1905), he came to Cleveland to work for the EAST OHIO GAS CO. With the help of JOHN D. ROCKEFELLER, he went into business in 1907, securing natural-gas franchises in Manitoba, Canada for a New York banking syndicate, which collapsed. With the franchises, Eaton organized the Canada Gas & Electric Corp., consolidating his companies into the Continental Gas & Electric Corp. in 1912. Eaton settled in Cleveland in 1913 and diversified, in 1916 joining Otis & Co. banking firm, in 1926 organizing Continental Shares, Inc. investment trust, and in 1929 consolidating the Republic Steel Corp. His 1929 wealth was an estimated $100 million, most of which he lost in the Great Depression.  Eaton rebuilt his fortune in the 1940s and 1950s, becoming a director (1943), then board chairman (1954), of the CHESAPEAKE & OHIO RAILROAD; and also board chairman of the West Kentucky Coal Co. (1953).

During the Cold War, Eaton urged the U.S. and SOVIET UNION to develop better relations to avert the prospect of nuclear war.  He had a unique perspective on Russia, given his friendship with Samuel Harper, the son of University of Chicago President William Harper and the first major scholar and historian of Russia in the United States.  In 1955, Eaton hosted a group of visiting Soviet journalists at his Acadia Farms in Northfield, OH as part of a State Department exchange. The visit convinced Eaton of the necessity of détente with Moscow. That same year, he transformed his boyhood home in Pugwash into a "Thinker's Lodge," inviting scholars for a week's retreat. He invited Soviet scholar Aleksandr M. Samarin in 1956, and in 1957 the first Pugwash Conference of Nuclear Scientists brought scientists from around the world to discuss international issues.  Eaton also visited the USSR several times and cultivated friendships with top Soviet leaders, including Nikita Khrushchev and Anastas Mikoyan. The latter visited Cleveland in 1959, during which time he met with Eaton and presented him with a Russian troika (a sleigh carried by three white horses) at Acadia Farms. It was an expression of Moscow’s gratitude for Eaton’s earlier gift of two prize-winning Scottish shorthorn bulls for the Soviet beef industry. Khrushchev highly valued his friendship with Eaton, according to his son Sergei.  Indeed, the Soviet reformer even consulted with Eaton and his wife Anne on his disappointment with President Dwight D. Eisenhower following the U-2 spy plane incident. Eaton in turn invited Khrushchev to visit Cleveland in 1960, but this trip never materialized due to opposition from the State Department. Eaton was awarded the Lenin Peace Prize by the Soviet Union in 1960 and he invited Soviet cosmonaut Yuri Gagarin, the first man to fly into outer space, to Pugwash in 1961.

Eaton was active in Cleveland. He was a founder and trustee of the CLEVELAND MUSEUM OF NATURAL HISTORY; helped transform the YMCA night school into FENN COLLEGE; and was a trustee and benefactor of Case School of Applied Science. Eaton married twice; first, in 1907, to Margaret House; then to Anne Kinder Jones in 1957. He had seven children: Margaret Grace, Mary Adelle, Elizabeth Ann, Anna Bishop, Cyrus S. Jr., Augusta F., and MacPherson. Eaton died at his home and was buried in Nova Scotia. 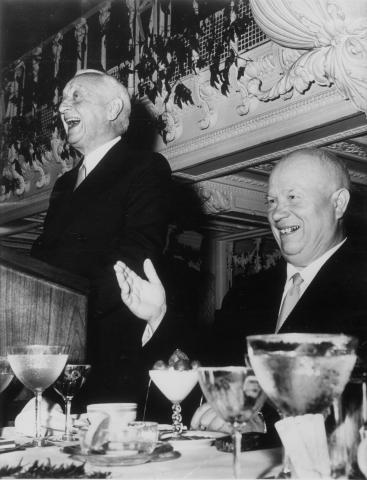 Sergei Khrushchev, interview by Pietro A. Shakarian, Cranston, RI, May 3, 2019.

View image of Eaton and wife with Nikita Khrushcev, 1964. Courtesy of WRHS.

View image of Eaton meeting with Soviet journalists at his Acadia Farm, 1955. Courtesy of the Cleveland Public Library Photograph Collection.