The FIRST BAPTIST CHURCH OF GREATER CLEVELAND in CLEVELAND HTS. resulted from a union in 1927 of the First Baptist Church of Cleveland and the Cleveland Hts. Baptist Church. Moses White and BENJAMIN and REBECCA ROUSE were among the first group of Baptists who met in the upper rooms of the "Old Academy" at St. Clair and W. 6th St. Rev. Richmond Taggart, a Baptist minister who had stopped in Cleveland on his way west, preached to them on 19 Nov. 1832, when the "First Baptist Society of Cleveland, Ohio" organized. On 16 Feb. 1833, 17 Baptists formally established the First Baptist Church of Cleveland. Charter members included African American JOHN MALVIN. Membership grew rapidly, and in 1834 First Baptist built a large brick sanctuary with a 150' spire at the corner of Seneca (W. 3rd) St. and Champlain St. In Apr. 1836 Rev. Levi Tucker became the first permanent pastor (1836-42). The growing congregation purchased the Plymouth Bldg. at the northwest corner of Euclid Ave. and Erie (E. 9th) St. in 1855. 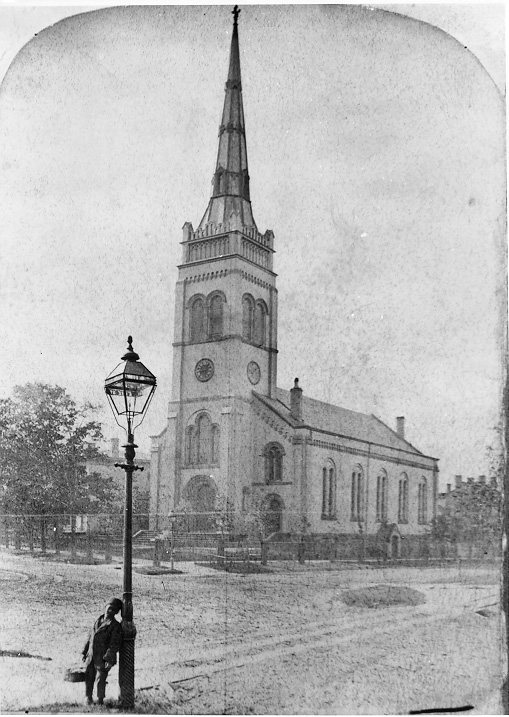 First Baptist organized many other local churches and mission Sunday schools, including the Idaka Chapel, built in 1874 at the corner of Prospect Ave. and Kennard (E. 46th) St. by STILLMAN WITT and his daughter, Mary Witt (Mrs. Dan Parmelee) Eells, as a memorial to Witt's granddaughter, Idaka Eells. In 1887 the chapel was joined by First Baptist, which built a Romanesque-style church, dedicated on 9 Sept. 1889, adjacent to Idaka Chapel. Many First Baptist members continued to move eastward, and in Dec. 1919, 25 people formally organized the Baptist Church on the Heights. Members worshipped in Coventry Elementary School in Cleveland Hts. and within 2 years numbered over 300.

Rev. Theodore R. Adams helped plan the merger of the Heights Church and First Baptist, establishing the First Baptist Church of Greater Cleveland. The downtown building was sold, and on 12 June 1928 a cornerstone was laid at 3630 Fairmount Blvd., at Eaton and Shelburne roads. Dr. Harold Cooke Phillips, who had been serving both congregations, was formally installed as pastor on 14 Oct. 1928. The Gothic church, built by Cleveland architects WALKER AND WEEKS of light-colored Indiana limestone, was dedicated 2 June 1929. Membership in the 1990s stood at approximately 600.