The FRANCO-PRUSSIAN WAR PEACE JUBILEE was held on Monday, 10 Apr. 1871, to celebrate the German victory ending the Franco-Prussian War (1870-71). Cleveland's German societies began planning the celebration in Mar. 1871, electing Rev. Dr. JACOB MAYER of the Tifereth Israel Congregation as president of the committee organizing the event. Franco-Prussian War Peace JubileeA temporary triumphal arch, 85' tall, was erected on Superior St. just east of the PERRY MONUMENT. The first event of the jubilee was a concert of all the German singing societies and the Orchestra of Germany Band in CASE HALL on 8 Apr. The Jubilee Day began with a 101-gun salute at daybreak on the lakefront. By mid-morning the "elaborate preparations" were ready; an "immense throng" of visitors arrived from surrounding areas via the railroads, which offered reduced fares, and the city streets and businesses were decorated with "thousands of banners" and flags. The highlight of the day was the long parade, which, according to the Leader's correspondent, took 58 minutes to pass and included 490 horsemen, 1,700 marchers on foot, and 39 carriages, including decorated firewagons and butchers' and brewers' wagons. After winding through the city streets for nearly 3 hours, the procession returned to the square for addresses by Rev. Mayer and AUGUST THIEME of the Waechter am Erie. The celebration, which cost the German societies about $3,000, ended in the Central Rink with a ball which lasted until 4 A.M. 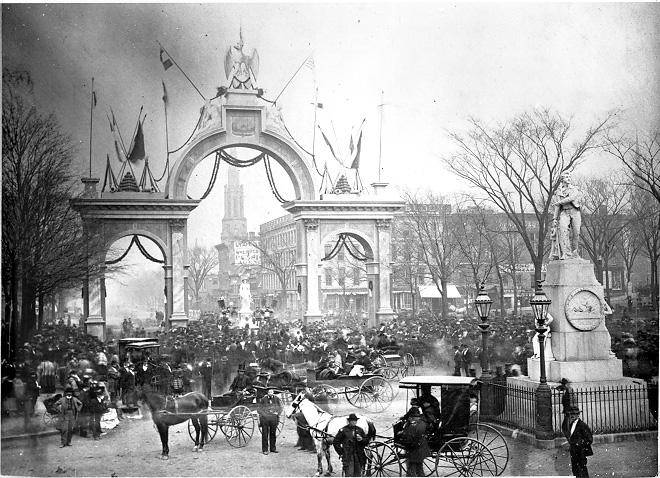