The GARFIELD MONUMENT, located on a sloping hill near Mayfield Rd. in LAKE VIEW CEMETERY, was built as a tomb and memorial to Pres. JAMES A. GARFIELD. Construction of the monument began in 1885 with funds raised by the Garfield Natl. Monument Assn. headed by JEPTHA H. WADE. Construction was completed in 1890 and the monument was dedicated on 30 May of that year, with a procession of notables including Pres. Benjamin Harrison, former president Rutherford B. Hayes, and members of the Garfield family. James A. Garfield. The monument is constructed of native Ohio sandstone upon a design by Geo. Keller, architect of Hartford, CT, who had won the commission in a national competition. Keller was assisted by John S. Chapple of London, who supervised the work on the mosaics and stained-glass windows. A combination of Romanesque, Gothic, and Byzantine architecture, the structure has been called the first true mausoleum in America, combining both tomb and memorial functions. The monument, pinnacled by a 3-tiered circular tower 50' in diameter and 180' in height, stands upon a broad stone terrace. The exterior of the base is decorated with 5 life-size bas relief panels depicting Garfield in different phases of his life and career. A white Carrara marble life-size statue of Garfield stands inside the monument in the memorial room. The caskets of Garfield and his wife, Lucretia, and urns containing the ashes of his daughter and son-in-law, lie in a crypt directly beneath the memorial hall. In 1985 Lake View received a $500,000 grant from the U.S. government to renovate the monument. 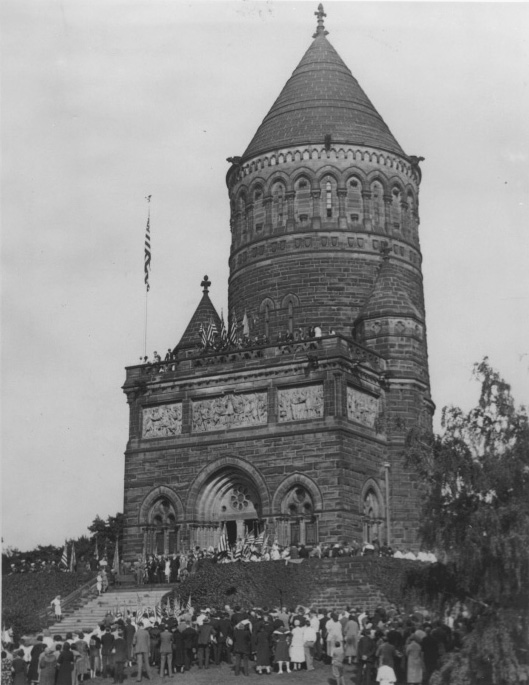