The HAYMARKET was an area of downtown Cleveland that lay to the south and west of PUBLIC SQUARE near the east end of the HOPE MEMORIAL (Lorain-Carnegie) BRIDGE. Beginning as a marketplace, it evolved into a residential and commercial district, and then degenerated into the city's first slum. Covering about 4 acres, the Haymarket district was bounded on the north by Race Ave. SE, on the south by Harrison St. and the CENTRAL VIADUCT, on the east by Ontario St., and on the west by the CUYAHOGA RIVER. It developed after 1839, when a small wooden building was constructed as the first municipal marketplace at the corner of Michigan and Ontario. Before sunrise on Tuesday, Thursday, and Saturday, farmers would drive their wagons to stables on Central Ave. and Race Ct. and sell produce and hay while their horses sampled the hay. By 1856 the city council voted to build a new market at Pittsburgh (Broadway) and Bolivar, but the area remained a feed station for horses. Early in its history, the Haymarket was surrounded by fine homes, but owing to the influx of thirsty farmers, canal men, and lake seamen, it was also dotted with saloons—30 on Commercial St. alone—and lodging houses. After the CIVIL WAR, cheap housing made the Haymarket attractive to impoverished immigrants. Though Italians and Slavs predominated in 1870, later contemporary observers counted 40 nationalities and 14 languages. For some, the Haymarket was a stopping place; for others, enmeshed in the cycle of poverty, its deteriorating housing provided permanent residence. The area and nearby Whiskey Hill became an overcrowded refuge for the unemployed, derelicts, transients, and criminals who preyed on the other hapless residents. Nearby factories and passing trains polluted the area with dirty smoke. 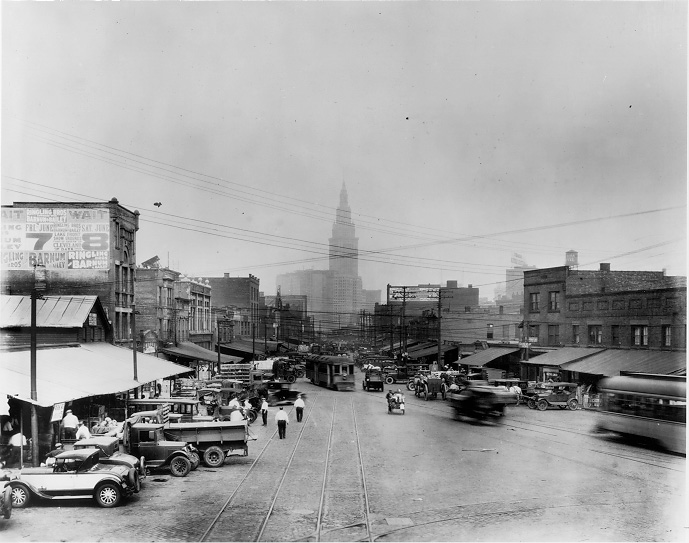 The Haymarket area along Ontario Ave., ca. 1930. The facilities for the Gateway sports complex now occupy much of the site. WRHS.

At a time when 2 quarts of beer cost $.05 and neighborhood people sat on the curb drinking it from pails, the Haymarket became a focal point for temperance activities by the newly formed Women's Christian Temperance Union and the YOUNG WOMEN'S CHRISTIAN ASSN. In 1874 the YWCA attempted to preserve a wholesome atmosphere in the neighborhood by opening the Central Friendly Inn at Central Place. The inn had a reading room and meeting hall for men and boys, and later a restaurant, kindergarten, playground, children's library, and commercial laundry. When the inn moved to Central and Broadway in 1888, it included low-rate boarding rooms for drunks, chapel services and nightly temperance meetings. In a similar vein, the WCTU opened storefront canteens, and the SALVATION ARMY opened a barracks. To meet the medical needs of Haymarket residents, especially women and girls, Dr. MYRA MERRICK organized the Children's Free Medical & Surgical Dispensary in 1878 on Webster St. The hospital, a precursor of Woman's General Hospital, offered women doctors a place to practice their skills as well as aided the needy. The Haymarket was regarded as such a tough area after 1880 that the police patrolled the "Hill" - the crest of Commercial St. SE - in 3's or 4's. Early crime kings "Blinkey" Morgan and "Johnny" Coughlin terrorized the downtown area from headquarters in the Haymarket, creating a crime lore that was thinly disguised in the fiction of Alfred Henry Lewis. Much of the area was razed for the building of the CLEVELAND UNION TERMINAL in the 1920s, and its residents nearest to Public Square were displaced. Innerbelt construction wiped out much of the Haymarket region in the 1950s. By the 1990s, the GATEWAY sports complex occupied much of the traditional Haymarket area.