KULHANEK, JAMES CHARLES (23 April 1908-1 April 1990) a noted regional artist, was born in Cleveland the son of Anna (Veleba) and Vaclav Kulhanek who settled in Cleveland in the early 1900’s from their native Bohemia.

From an early age James displayed his interest in drawing, requesting pencils in lieu of candy or toys.  In grade school he won numerous art contests and was awarded free drawing classes at the CLEVELAND MUSEUM OF ART..  Graduating from the 8th grade he spent a year as a page in the Fine Arts Dept. of the newly opened main branch of the CLEVELAND PUBLIC LIBRARY..  On the recommendation of a former educator, James was awarded an apprenticeship at Otis Lithography where he befriended AUGUST BIEHLE, JR..  During the Depression, while working in the pattern dept. of FISHER BODY, James attended Life Drawing classes at John Huntington Polytechnical Institute's Dept. of Applied Art.  His instructors included WILLARD COMBES, Rolf Stoll, FRANK WILCOX, and HENRY KELLER, recognized members of the Cleveland School of Artists. 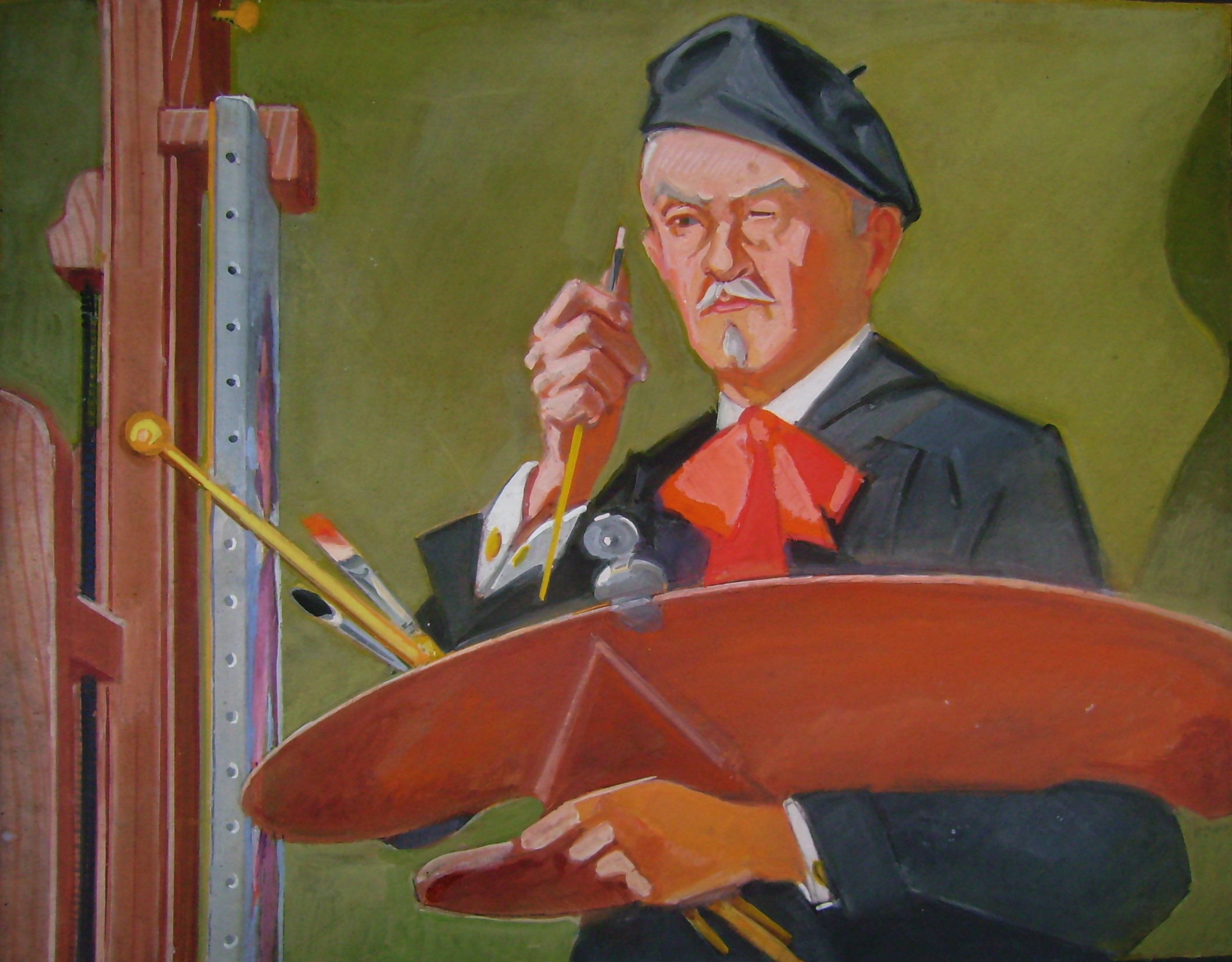 Courtesy of James Kulhanek
Self-portrait of James Charles Kulhanek in his artist regalia at age 86, 1974

The opening of the GREAT LAKES EXPOSITION on Cleveland’s lakefront in 1936 provided him the opportunity to display his talents as a portrait artist rendering pastel portraits of expo visitors on the marine plaza.  One visitor, famed magazine illustrator Warren Baumgartner, captured Kulhanek’s profile in a 1936 sketch.  After the passing of his personal hero, Tomáš Garrigue Masaryk, Czechoslovakia’s first president, Kulhanek painted an equestrian portrait as a tribute.  During the Great Depression, the WPA offered artists steady employment.  Kulhanek was teamed with Hungarian artist John Csosz to paint murals in CLEVELAND PUBLIC SCHOOLS.  He also produced numerous wildlife drawings, some of which are currently housed in the New Deal Archive at CASE WESTERN RESERVE UNIVERSITY and the General Services Administration.  In October 1938, while drawing the bears at the CLEVELAND ZOO, he helped rescue fellow artist, Judy Zemnick who was dragged into the bear grotto and mauled by the polar bear.

Just prior to World War II, Kulhanek began a 19-year career as a staff artist with the CLEVELAND PLAIN DEALER.  When the war began, Kulhanek answered the call to arms by joining the Federal Reserve Bank Guard.  While working 2 jobs he still found time to draw illustrations for the Federal Reserve Notes, the banks’ newspaper.  After the war, Kulhanek worked for The Brink’s Company while still employed by the Plain Dealer.

Kulhanek was an enthusiastic fencer (foil, saber, epee) since childhood.  Being a member of the Federation International D’Escrime and of SOKOL NOVA VLAST, a Czech gymnastic organization, he coached fencing and competed against other fencing clubs.  He met his future wife, Joyce Margaret Imhof, a Western Reserve University nursing student and fencer.  They were married 11 August 1951.  Joyce survived her husband by 10 years passing away 13 June 2000.  Kulhanek joined Bing’s Furniture as Art Director until its liquidation in 1961.  Kulhanek, a champion for social justice and liberty was inspired to paint an oil portrait of the American Bald Eagle, the living symbol of freedom.  Kulhanek gifted the painting in February 1961 to President John Fitzgerald Kennedy as a tribute to his crusade for freedom around the world.  In 1966, angered by the U.S. incursion into Vietnam, he painted an epic panorama of the State of the Union entitled “Road to Peace”, which was applauded by Senator Robert F. Kennedy.  Kulhanek turned his design talent to architecture when he designed the “Chateau of Berea,” his castle home and art studio overlooking Wallace Lake.  In the 1970’s, after a 50-year career as an artist, Kulhanek developed a novel approach to the fundamentals of composition which inspired a series of 31 unique paintings that offered the discriminating collector the ultimate in aesthetic design.  This collection was unveiled at HALLES DEPARTMENT STORE Downtown Gallery in 1977.

After the Republican Party returned to national power in the 1980’s, Kulhanek turned his attention to the ongoing class struggle which he depicted in a series of political illustrations.  As a champion of the deprived, his final creation was the dynamic portrait of Cleveland Mayor Dennis Kucinich.  He discovered Kucinich was denied an official portrait by the business community due to the mayor’s crusade to save Muni Light. Kulhanek summoned the strength to paint the portrait while battling terminal cancer.  He died shortly after finishing this masterpiece at age 82.  He was survived by his son James F. Kulhanek. 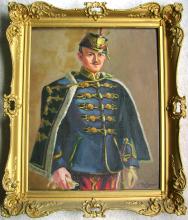 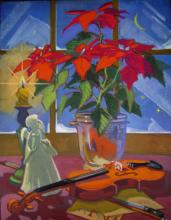