The LAKE SHORE ELECTRIC RAILWAY CO. was a major interurban electric trolley operated between Cleveland, Lorain, Sandusky, Norwalk, Fremont, Toledo, and Detroit. Given a charter on 24 Sept. 1901 (sometimes given as 25 Sept.) the interurban was created by consolidating 4 railways on 12 Oct. 1901. Two Cleveland magnates, EDWARD W. MOORE and HENRY A. EVERETT, were responsible for the merger of the Lorain & Cleveland Railway Co. and the Sandusky, Milan & Norwalk Railway. With executive offices located in Cleveland, and general offices in Norwalk, the Lake Shore Electric began through service from Cleveland to Toledo in Dec. 1901, and soon built a central depot at the intersection of Bolivar and Erie streets. The Lake Shore sponsored excursions to the Lake Erie islands ferry docks and the lakefront resorts in an effort to build passenger traffic. In 1907 the line operated 114 cars and 196.2 miles of track and carried over 5 million passengers; the following year the Lake Shore Electric organized the Illuminating & Power Co. to generate electricity for its operations. In 1915 the line operated 8 limited-stop trains per day between Cleveland, Toledo, and Detroit, and 20 additional main-line trains left Cleveland for Toledo every hour from 5 A.M. to midnight. With the increasing popularity of the private automobile and buses in the 1920s, the Lake Shore Electric began losing money, and on 30 Jan. 1933 the faltering interurban went into receivership. Fred W. Coen, the owner since 1927, was named receiver and served in that capacity until the last car was run from Cleveland to Lorain on 15 May 1938. 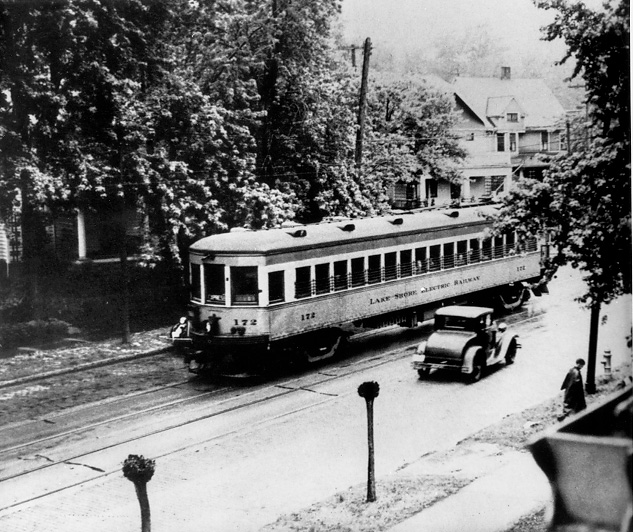 A Lakeshore Electric Railway interurban car passes an automobile during the 1920s. WRHS.