LAKE VIEW CEMETERY, located between Mayfield and Euclid Ave. at Cleveland's eastern boundary, is known for its hilly, manicured landscape graced by monuments of famous Clevelanders and overlooked by Pres. Jas. A. Garfield's tomb. In July 1869 the Lake View Cemetery Assn. was formed with JEPTHA H. WADE as president. Several sites near E. Cleveland were considered before almost 200 acres were purchased for $73,000. Concern about the cemetery's distance from the city—almost 6 mi. from the courthouse and 2 mi. east of 55th St. (the city limits)—weighed on the trustees' minds as the first lots were selected in July 1870. Clevelanders appreciated the natural setting of Lake View, however, which became a place to visit on Sunday outings. When Geo. H. Keller's GARFIELD MONUMENT was opened on Memorial Day 1890, more visitors came. By June 1891 separate admission tickets were issued to lot holders and to the public. This popularity, however, was slow to carry into lot sales. Associated as the cemetery was with wealthy east side society, frequent reminders were necessary that sites could be purchased by those of "modest means." As Lake View matured, its architectural and historical presence complemented its natural setting. Esteemed Clevelanders were reinterred from other burial grounds and distinctive monuments honored CHAS. F. BRUSH and JOHN D. ROCKEFELLER, a former trustee. To remember Wade, the Wade Memorial Chapel, with a Tiffany-designed interior, was built in 1901. Others of note buried in Lake View are NEWTON D. BAKER, CHAS. CHESNUTT, MARCUS HANNA, and the VAN SWERINGENS. Near the Euclid Ave. entrance is a monument for the 169 pupils and 3 adults who died in the 1908 COLLINWOOD SCHOOL FIRE. Lake View's peaceful setting of ornamental plantings and picturesque lakes created from Dugway Creek belies the largest dam in Cuyahoga County, which was built above the lakes in 1978 for flood control. Lake View celebrated its 125th anniversary in 1994-95. 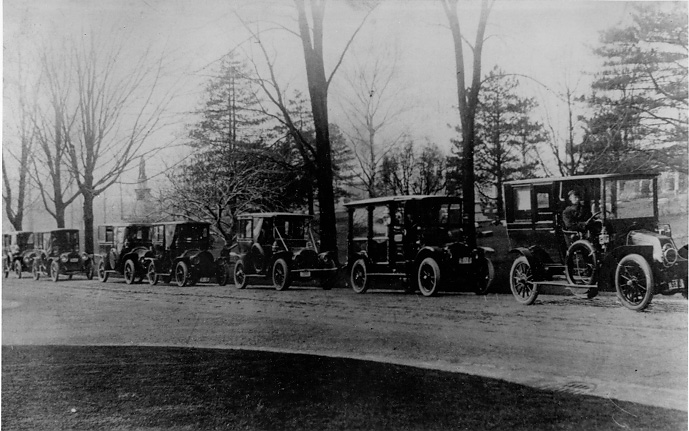