The LAKESIDE UNIT, WORLD WAR I, formally designated U.S. Army Base Hospital No. 4, was the first contingent of the American expeditionary forces to be transported to Europe after the U.S. entry into World War I. Based in a British army hospital near Rouen, France, it provided medical care for Allied troops from the spring of 1917 to the winter of 1918-19. In 1915 a surgical team from Lakeside Hospital headed by Dr. GEORGE W. CRILE volunteered to serve a short stint at the American Ambulance Hospital in Paris. Upon his return, Crile, along with officials of the AMERICAN RED CROSS, prepared a plan for making U.S. civilian hospital staffs available for overseas military service. The Red Cross organized base hospital units at 25 hospitals across the country, with the stipulation that they would pass from the jurisdiction of the Red Cross to that of the U.S. War Department should the U.S. enter the war. Lakeside Hospital signed such an agreement in the spring of 1916, pledging to assemble trained personnel to staff a 500-bed army hospital. Its medical officers received army commissions, and its nurses were enrolled in the Red Cross. 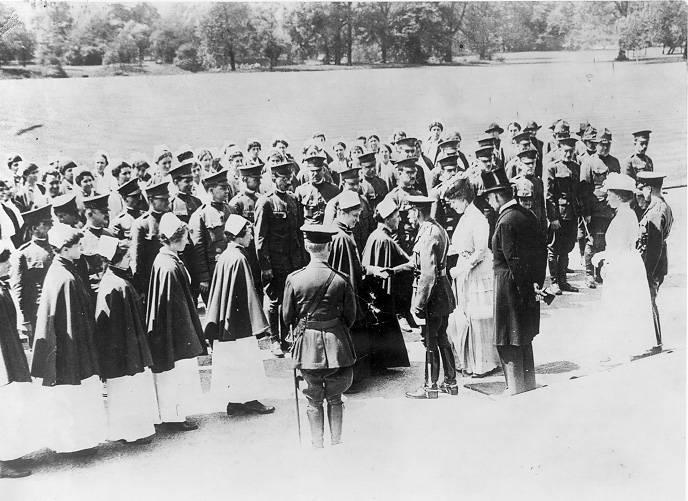 The Lakeside Nursing Unit is received by King George V and Queen Mary at Buckingham Palace, 18 May 1917. CWRU Archives.

Base Hospital No. 4 received the order for mobilization on 28 April 1917. An enlistment office was set up to recruit nonmedical personnel, and Col. Harry L. Gilchrist assumed command. The Lakeside Unit departed Cleveland on 6 May 1917, with 26 medical officers, 64 nurses, 156 enlisted men, and 4 civilian employees. The unit reached Rouen on 25 May. It was based at the British Expeditionary Forces Hospital No. 9, a few miles outside of the city. During 20 months of European duty, the unit handled 82,179 cases. Most of the patients were from Great Britain and British Commonwealth countries.

In Aug. 1918 Mobile Hospital No. 5 was organized to assist in the care of seriously wounded patients in the American sector of the battlefront, staffed by 61 members of the Lakeside Unit. It was mobilized for the Meuse-Argonne offensive and opened on 25 Sept. in the Bois de la Placys. That unit cared for 994 patients, mostly American, French, and German, between then and the end of the year, when it closed. Reinforcements sent to the Lakeside Unit during its tour of duty brought the total number serving with it to 42 medical officers, 124 nurses, 356 enlisted men, and 5 civilians. Five officers commanded the unit in turn: Col. Gilchrist, Maj. WILLIAM E. LOWER, Maj. Walter C. Hill, Maj. Allen Graham, and Col. FRANK E. BUNTS. The unit's first head nurse was Grace Allison; Elizabeth Folckemer succeeded her in late summer 1918. There were no fatalities among the unit's personnel. Following the armistice the hospital closed, 23 Jan. 1919; its personnel were demobilized during April and May.