LITTLE ITALY, one of 5 major Italian settlements in Cleveland (see ITALIANS), is located from E. 119th to E. 125th streets on Murray Hill and Mayfield roads. Established in 1885, this physically well-protected and well-defined ethnic enclave is bordered by the forested bluff of LAKE VIEW CEMETERY to the north and east and the Regional Transit Authority's Windermere-Airport Rapid Transit line and the CASE WESTERN RESERVE UNIVERSITY CAMPUS campus to the west. Little Italy Often referred to as "Murray Hill" because of the street by that name in the center of the neighborhood, the Italian hilltown has a reputation as a closed community whose assets are historic and original. By the late 1890s, many Italian immigrants had settled in the Mayfield-Murray Hill area and worked in the nearby marbleworks, one of which, the Lakeview Marble Works, was founded by skilled stonemason JOSEPH CARABELLI. In 1911 it was estimated that 96% of the inhabitants were Italian-born, and another 2% were of Italian parents. Many of these Italians were Neapolitan and were engaged in skilled lacework, garmentmaking, and the embroidery trades. The largest group came from the towns of Ripalimosani, Matrice, and San Giovanni in Galdo, located in the Campobasso Province. Present-day Little Italy is one of the few city neighborhoods attracting thousands of suburban shoppers in a rush to capitalize on its historical charm. Relatively crime-free, Little Italy is a trendy, upscale center for art, dining, and gracious living. As of 2021, the Italian character and presence in the neighborhood remains predominant. However, in recent years, Italian residents have been joined by others, including numerous Asian and Middle Eastern graduate students from CWRU, as well as ALBANIAN and Latin American immigrants. In the community where the macaroni machine was invented in 1906, visitors will find the Little Italy Historical Museum, the ALTA HOUSE and Library, Murray Hill School, the HOLY ROSARY CHURCH, numerous restaurants, and artists' studios and shops. In 1993 the community dedicated Tony Brush Park, named for champion boxer and Little Italy resident Anthony Brescia, at Mayfield and Random roads. 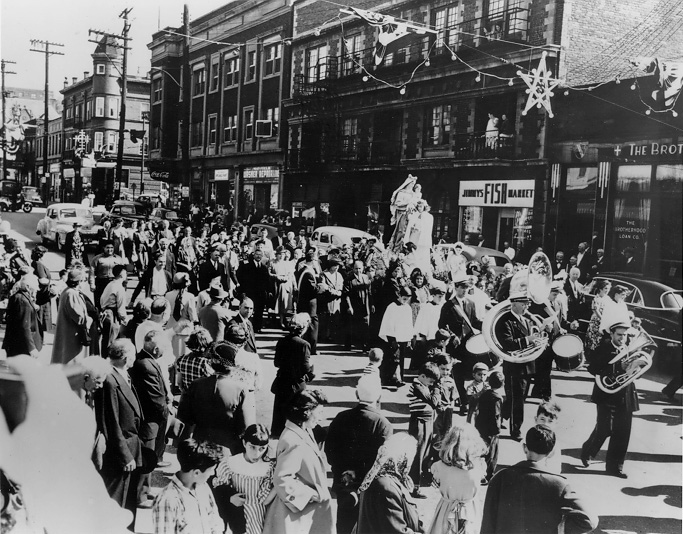 A band heads the procession at the Feast of the Assumption parade in Cleveland's Little Italy, ca. 1950. WRHS.