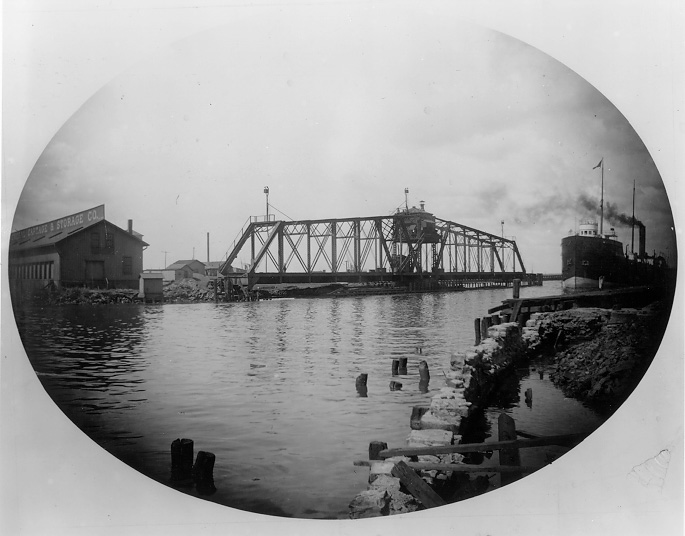 The original bridge at Main Ave. was a float bridge, co-owned by the city of Cleveland and OHIO CITY. The next version, a swing bridge, was completed on 3 July 1869, and measured 200' in length and 31' in width. "So perfect is the mechanism of the structure [that] a boy of 12 years can swing the mighty mass with ease," the CLEVELAND HERALD declared after its opening. In 1885 the bridge was rebuilt and installed with a steam-operated draw; subsequent minor renovations followed.

The bridge which now connects the East and West Shoreways opened 6 October 1939. It was erected over a 17-month period beginning in May 1938 with joint funding from Cuyahoga County and the Public Works Administration of the WORKS PROGRESS ADMINISTRATION. During the primary 1938-39 construction, workers utilized over 24,000 tons of steel and 55,000 cubic yards of concrete to build the cantilever truss crossing. The 271' girders over the railway tracks on the lakefront ramp represented the longest span girders ever built in the nation at the time. 5 workers died over the course of the project, which cost $7.5 million. The structure was rededicated in honor of former Cleveland Mayor HAROLD H. BURTON in 1986. On 13 April 1991 the bridge was closed for major renovation by Cuyahoga County and the Ohio Dept. of Transportation. The $65 million project included the widening of the bridge's traffic lanes from 10 to 12', installation of a new 400-watt sodium vapor lighting system, construction of a new 42" traffic median, drainage reconstruction, and repair or replacement of deteriorated steel. One worker died during the project. The bridge reopened 16 Oct. 1992, and in 1995 carried an average daily traffic volume of 45,647 automobiles.