MAYORAL ADMINISTRATION OF CARL B. STOKES

The MAYORAL ADMINISTRATION OF CARL B. STOKES (1967-1971) was marked by progress, controversy, and the unrest prevalent in many urban areas of the U.S. Stokes, a graduate of CLEVELAND MARSHALL LAW SCHOOL, was admitted to the Ohio Bar in 1957 and served as an asst. prosecutor in the city's law department for 4 years. His political career as a Democrat began in 1962 when he was elected to the Ohio general assembly, where he remained for 5 years. Entering the Cleveland mayoral race in 1965 as an independent, Stokes narrowly lost to incumbent Democratic mayor LOCHER, RALPH, but he defeated Locher in the Democratic primary and won in the general election over Republican candidate Seth Taft in 1967, becoming the first black mayor of a major American city. He was reelected to a second term in 1969. 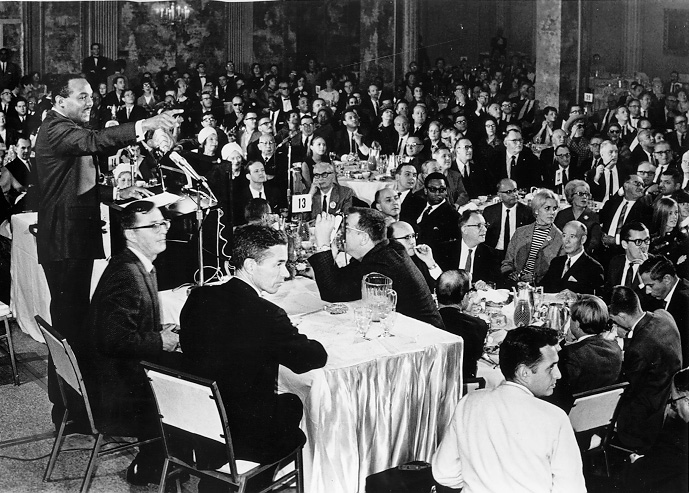 A large crowd sits at tables to hear Carl B. Stokes and Seth Taft debate at the City Club of Cleveland during the 1967 mayoral campaign. Cleveland Press Collection, CSU Archives/Photo by Bill Nehez.

As mayor, he persuaded the Department of Housing & Urban Development to release urban-renewal funds frozen during the Locher administration and prevailed on city council the increase the city income tax from .5% to 1%. During his administration the Equal Employment Opportunity Ordinance was passed requiring firms doing business with the city to have active programs to increase their minority employment, spending was increased for schools, welfare, and public safety, and a $100 million bond issue was approved by voters to improve the city's sewage treatment facilities. The CLEVELAND: NOW! program, launched by Stokes to rehabilitate the city, raised over $5 million, which benefitted a wide variety of community programs. However, contributions dried up in the aftermath of the GLENVILLE SHOOT-OUT, when it was discovered that Fred Ahmed Evans and his militant group had received some $6,000 from Cleveland: NOW! funds. The relationship between the mayor and the police department deteriorated after the shoot-out. Stokes attempted to reform the department, believing they were unresponsive to the people's needs, but was unsuccessful. Conflict with city council and the voters' failure to approve a needed increase in the city income tax persuaded him not to seek a third term in 1971. Stokes left Cleveland to become a broadcaster at WNBC-TV in New York. He returned to Cleveland in 1980 and established a private law practice. He was elected municipal court judge in 1983 and in 1994 was appointed U.S. ambassador to the Seychelles.

View finding aid for the Carl B. Stokes Papers, Series I, WRHS.