STOKES, CARL B. (21 June 1927-3 April 1996) became the first AFRICAN-AMERICAN mayor of a major U.S. city when he was elected mayor of Cleveland in November 1967. He later became a news anchorman, judge, and a United States Ambassador. He was born in Cleveland to Charles Stokes, a laundry worker who died when Carl was two years old, and Louise (Stone) Stokes, a cleaning woman who then raised Carl and his brother Louis in Cleveland's first federally funded housing project for the poor, Outhwaite (see PUBLIC HOUSING). Although a good student, Stokes dropped out of high school in 1944, worked briefly at Thompson Products (see TRW, INC.), then joined the U.S. Army at age 18. After his discharge in 1946, Stokes returned to Cleveland and earned his high school diploma in 1947. He then attended several colleges before earning his bachelor's degree from the University of Minnesota in 1954. He graduated from CLEVELAND-MARSHALL LAW SCHOOL in 1956 and was admitted to the Ohio bar in 1957. For 4 years he served as assistant prosecutor and became partner in the law firm of Stokes, Stokes, Character, and Terry, continuing that practice into his political career.

Elected the first black Democrat to the Ohio House of Representatives in 1962, he served 3 terms and narrowly lost a bid for mayor of Cleveland in 1965. His victory two years later drew national attention. Able to mobilize both black and white voters, he defeated SETH TAFT, the grandson of a former U.S. president, with a 50.5 majority. He was reelected in 1969. 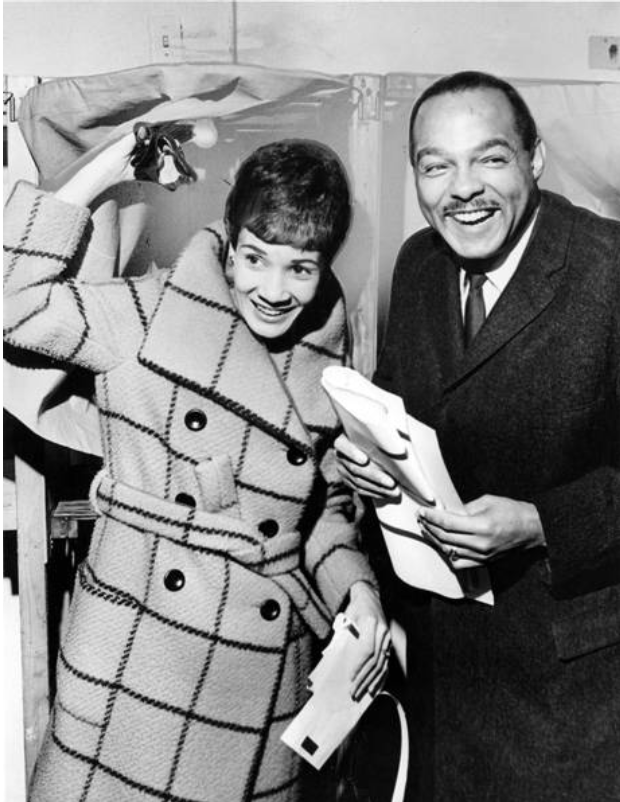 Cleveland Memory
Carl Stokes and his wife Shirley outside a voting booth on Election Day, 1967. By winning the election, Stokes became the first African-American to be elected mayor of a large U.S. city.

During his two terms as mayor, Stokes opened city hall jobs to blacks and women, and introduced a number of urban revitalization programs (see MAYORAL ADMINISTRATION OF CARL B. STOKES). Choosing not to run for a third term in 1971, Stokes lectured around the country, then in 1972 became the first black anchorman in New York City when he took a job with television station WNBC. He returned to Cleveland in 1980 and began serving as general legal counsel for the UNITED AUTO WORKERS union. From 1983 to 1994 he served as municipal judge in Cleveland. President Clinton then appointed him U.S. Ambassador to the Republic of Seychelles. He was awarded 12 honorary degrees, numerous civic awards, and represented the United States on numerous goodwill trips abroad by request of the White House. In 1970, the National League of Cities voted him its first black president-elect.

Stokes married Shirley Edwards in 1958. They were divorced in 1973. In 1981, he married Raija Kostadinov, whom he divorced in 1993 and remarried in 1996. He had three children from his first marriage: Carl Jr., Cordi, and Cordell, and a daughter, Cynthia, and stepson, Sasha Kostadinov, from his second marriage. He was diagnosed with cancer of the esophagus while serving as Ambassador to the Seychelles and placed on medical leave. He returned to Cleveland and died at the Cleveland Clinic.

Finding aid for the Carl Stokes Papers, Series I, WRHS.