The OBERLIN-WELLINGTON RESCUE concerned a former slave, John Price, who had escaped from his owner, John G. Bacon. He fled to Oberlin, OH, a center of ABOLITIONISM prior to the CIVIL WAR and a depot on the Underground Railroad to Canada. Price lived there peacefully for 2 years until he was recognized by a neighbor of his former master. Bacon sent a slave-catcher named Anderson Jennings to Oberlin, who, with assistants, lured Price out of town and captured him. The party traveled to Wellington, 9 miles south, and took refuge in the Wadsworth House, a local hotel. 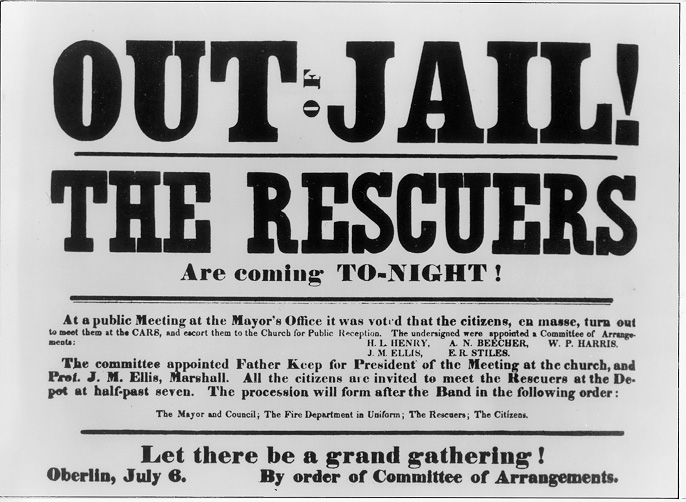 A broadside calling for public celebration of the return of the Oberlin-Wellington Rescuers, July, 1859. Oberlin College Archives.

After the abduction was discovered, the people of Oberlin marched in silent procession to Wellington to free Price. An estimated 600 citizens surrounded the hotel, removed Price through one of the windows, and returned him to Oberlin. They hid him in the house of the future college president, James H. Fairchild; he eventually escaped to Canada. On 7 Dec. 1858, 37 Oberlin and Wellington residents were indicted for their part in Price's escape, as violating the Fugitive Slave Law of 1850. They were arraigned in Cleveland by the U.S. District Court. The prisoners pleaded not guilty, and the trial was set for March 1859. Public opinion was with the indicted.

The trial began on 5 Apr. 1859. The defense was represented by RUFUS P. SPALDING, ALBERT G. RIDDLE, and Seneca O. Griswold and the prosecution by George W. Belden. The first to stand trial, Simeon Bushnell and Charles Langston, an African American, were found guilty, fined, and jailed. The rest of the cases were continued to the July court term. Trainloads of people paraded around Cleveland's PUBLIC SQUARE and delivered dozens of speeches of encouragement to the prisoners from a platform erected for that purpose. The jailed men wrote antislavery tracts and printed a newspaper, the Rescuer, during their 3-month term. The indictments were finally dropped and the men released.