PARKER, ADELE von OHL (13 Dec. 1885 - 21 Jan. 1966), also known as Adele Ohl and Adele von Ohl, was an equestrienne, daredevil rider, vaudeville performer, and from 1929 to 1966 the owner and operator of Parker's Ranch in NORTH OLMSTED, Ohio.  Parker was born in Jobstown, New Jersey, to Percy Ohl and Caroline Lane Ohl, and grew up in Plainfield, New Jersey, on a horse farm that had been owned by the maternal side of her family since 1712.  One of her ancestors was reputed to have sold horses to George Washington during the American Revolution.  She learned to ride on her family's farm and at a riding school in Plainfield owned by her grandmother and managed by her mother.

Parker's first public appearance as a daredevil rider was in 1905 at the Hippodrome Theater in New York City. There, riding astride her horse Delmar, she performed an act in which she plunged from a high platform into a tank of water below.  Her act captured the attention of the local media, who noted that she was one of the first women on the East Coast to ride astride her horse rather than on a side saddle.  From 1907 to 1909, Parker appeared with Buffalo Bill Cody's Wild West show, performing acts like picking up a gold coin from the ground while on a horse at full gallop and commanding her horse to rear up march on its two hind legs.  It was while she was performing with Cody's troupe that she met her future husband, James Letcher Parker.  The two were married in 1909.  They had no children and divorced in circa 1932. 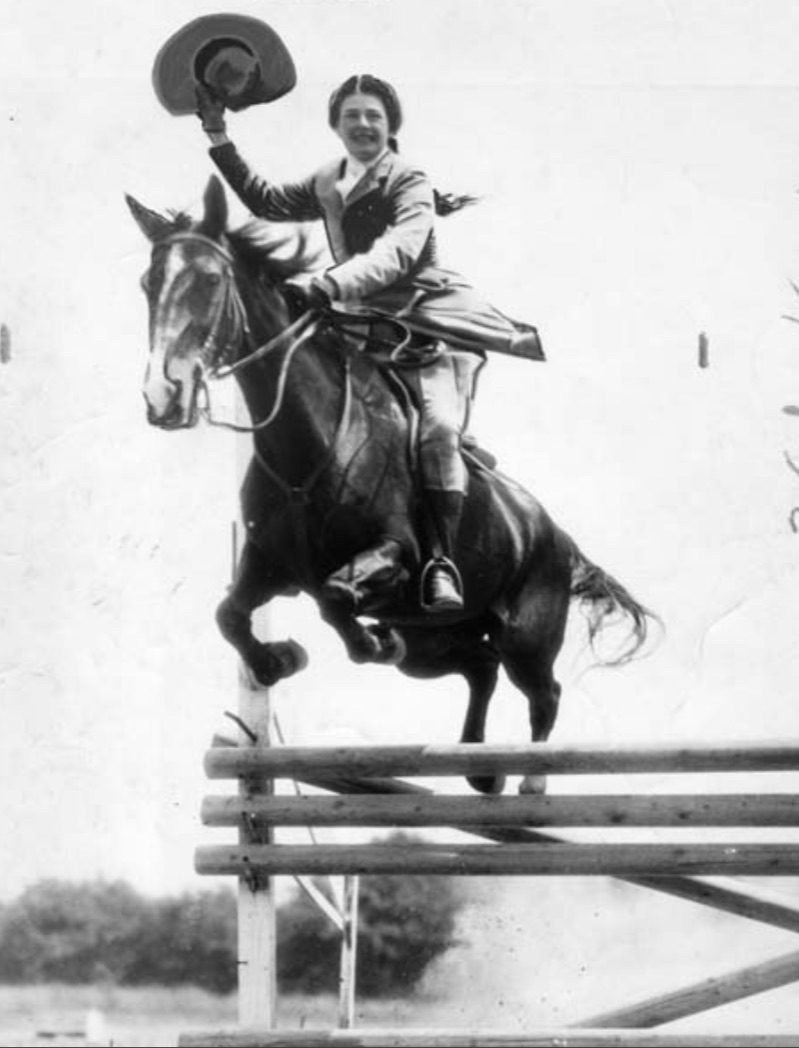 From 1910 to 1928, Parker traveled on the Vaudeville circuit, starring in a number of shows, most notably "Cheyenne Days."  During this period, she also made appearances with the Ringling Bros. and Barnum & Bailey Circus and, for several years, lived in Los Angeles and worked as a stunt woman on early Hollywood movie sets.  During World War I, Parker led a campaign to create a mounted Red Cross in the United States, which was to be composed entirely of upper class horsewomen.  While living in Los Angeles, she organized the "Junior Rough Riders," a horse riding school for urban youth.

In 1928, Parker traveled to Cleveland, Ohio, where she was scheduled to appear at the PALACE THEATER.  Her show was canceled, however, and she decided to remain in the area and start a riding school here, believing Cleveland held promise to become a midwest equestrian center.  Initially calling her school the "Von Ohl School of Horsemanship,"  she tried out several locations for it, including the CLEVELAND UNION STOCKYARDS and the Armory of TROOP A, 107th Cavalry in SHAKER HEIGHTS, before deciding in late 1929 to move it to a farm in North Olmsted owned by the Henry Giesel family.  The Giesel farm, which was located on Mastick Rd, west of Clague Rd, bordered on the CLEVELAND METROPARKS Rocky River Reservation and had bridle paths that led from the farm down into Rocky River Valley, making it an ideal location for a riding school.  Upon arriving in North Olmsted, she changed the name of her school to Parker's Ranch.

Parker's Ranch grew to include 34 buildings, some 60-70 horses, and an assortment of other animals.  The ranch, which was managed in the early years by Parker and her sister Winnonah and brother Percy, had a staff that included secretaries, cooks, handymen, and stablemen.  In addition to horseback riding classes, Parker started a number of other programs at the ranch that were directly aimed at teaching children, including disabled children.   It was estimated that, in her 35 years of operating the ranch, she taught more than 10,000 children how to ride a horse.  Most of these children came from Cleveland's west side and its western suburbs, but they also came from places more distant, including Medina and Summit Counties.  The programs she created included a day camp held each summer, 3-day rides into Metroparks Rocky River Reservation, and overnight stays at the ranch.  Parker also held a number of annual events at the ranch which offered children the opportunity to perform before family, friends and neighbors.  These events included a Mother's Day Show, a Horse Show, and, beginning in 1959, a Wild West Show, patterned after Buffalo Bill Cody's original Wild West.

In addition to the horseriding programs and events which she created on Parker's Ranch, which in 1980 became an Ohio Landmark, Adele von Ohl Parker was also a talented local artist who did sketches and paintings.  She was also one of the founding trustees of the Olmsted Historical Society.  Parker continued to perform on horseback well into her seventies.  She died on January 21, 1966, at the age of 80, and is buried at Sunset Memorial Park in North Olmsted.