TROOP A, also known as the 1st City Troop, the 1st Cleveland Cavalry, and the Black Horse Troop, was an independent military organization established after the Railroad Strike of 1877 raised fears about the ability of the militia to maintain law and order. Led by Dr. Frank Wells, Augustus G. Stone, DAVID Z. NORTON, John Tod, and Col. William H. Harris (captain, 1877-84), the 1st Troop, Cleveland City Cavalry, was organized on 10 Oct. 1877 as an "independent military company" whose 41 charter members were "desirous of perfecting ourselves in Horsemanship, in the Use of Arms, and Military Exercises." Initial members included such figures as CHARLES BOLTON, Henry S. Blossom, EDWIN H. COWLES, DAN P. EELLS, SAMUEL MATHER, and GEORGE W. WORTHINGTON. 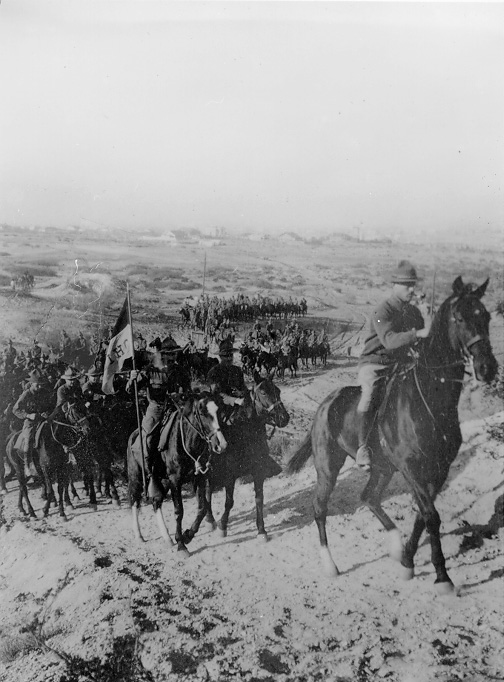 Members of Troop A patrol the Mexican Border on horseback, ca. 1916. WRHS.

Troop A was placed on alert several times during the 1880s and 1890s but was not called into action. During the SPANISH-AMERICAN WAR, the troop formed the nucleus of the 1st Ohio Volunteer Cavalry and went to Lakeland, FL, but again saw no action. Reorganized after the war by members of its Veterans Assn. (formed in 1891), Troop A saw action in the streets of Cleveland during the STREETCAR STRIKE OF 1899, escorting 2 cars down Broadway and standing guard around the city. Troop A was called to service during the tobacco wars in southern Ohio (1908); a streetcar strike in Columbus (1910); after floods in Fremont (1913); and after a tornado in Lorain (1924). In 1916 98 members of Troop A patrolled the border between Texas and Mexico during the border dispute.

During WORLD WAR I, Troop A and the Ohio Regiment of Cavalry became a field artillery unit and saw action in France, losing 5 members in combat. The troop left federal service in Apr. 1919 and rejoined the Ohio National Guard as Troop A, 107th Cavalry. At its 48th-anniversary celebration, Troop A received the original score of the "Black Horse Troop March," which John Philip Sousa had written in its honor. In 1940 the troop was reorganized as a Horse Mechanized unit, and during WORLD WAR II it saw action as the 107th Cavalry Reconnaissance Squadron. It returned to the Ohio National Guard in 1947 and continued service as the 107th Armored Cavalry Regiment. In 1962 the Veterans Assn. sold its armory to the Ohio National Guard, which in 1971 moved to new quarters at 4303 Green Rd. Because of the cutbacks in the U.S. Dept. of Defense, the unit was officially deactivated 29 Aug. 1993.