The PERRY-PAYNE BUILDING at 740 Superior Ave. W. was built in 1888-89 by HENRY B. PAYNE, prominent lawyer and railroad executive, who named it for himself and his wife, daughter of Nathan Perry, Jr. The building was occupied primarily by shipping and iron-ore company offices. The Perry-Payne represents the climax of a stage in commercial office construction before the introduction of the all-steel structural frame. The transition from masonry to iron construction developed independently in several cities. Perry Payne Building In Cleveland it is seen primarily in the work of FRANK E. CUDELL (1844-1916) and JOHN N. RICHARDSON (1837-1902). Three of their key buildings were still standing in the 1980s—the Geo. Worthington Bldg. at 802 W. St. Clair (1882), the Root & McBride-Bradley Bldg. on W. 6th St. (1884), and the Perry-Payne. In each one the ratio of window area to supporting masonry wall was increased, made possible in part by the use of interior iron columns. Where the two earlier buildings have wooden floors, the Perry-Payne has floors of tile and concrete. In addition, the Perry-Payne had an 8-story interior court with a glass roof, but it was floored over at a later date. Builders, architects, and other visitors came to Cleveland from considerable distances to inspect the building and its light court during the early years of its existence. In 1994-95, the building was rehabilitated into 92 loft-style apartments; renovation was directed by architects Robt. Gaedy and Jonathan Sandvizk. 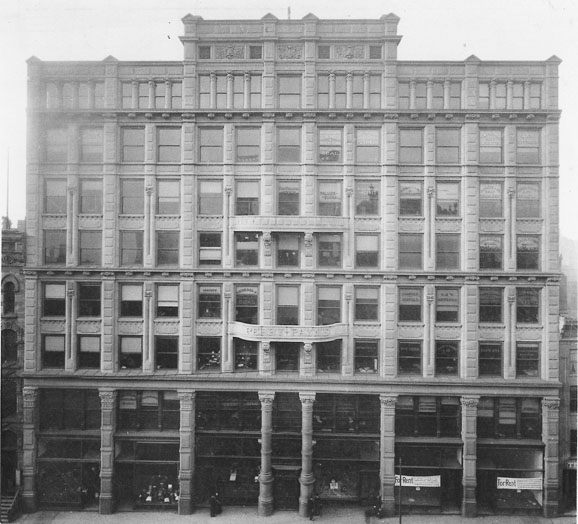 The exterior of the Perry Payne Building on Superior avenue as it appeared in the 1880s. WRHS.
Article Categories
Architecture
Related Links
http://perrypayneapts.com/aboutUs