ROCKEFELLER PARK covers approx. 200 acres on the city's east side, extending from GORDON PARK on the lakefront to SHAKER HTS. The northernmost and largest section, the Brookway Div., follows Doan Brook along Martin Luther King, Jr., Dr. (formerly Lower East Blvd., then Liberty Blvd.) for about 3 miles. In the middle, the Cedar Div. lies between Euclid Ave. and Ambler Park, while the Fairmount Div. connects Ambler with parks in Shaker Hts. The land was deeded to the city for use as a park by JOHN D. and Laura Spelman ROCKEFELLER on 5 Apr. 1897. The park was designed by landscape architect Ernest W. Bowditch, and Cleveland architect CHAS. F. SCHWEINFURTH designed the 4 distinctive bridges which carry Superior, St. Clair, and Wade Park avenues, as well as the Conrail track, across the Brookway Div. of the park. Near E. 105th St., Rockefeller Park Lagoon, an artificial pond, provided facilities for fishing, rowing, and ice skating. North of the lagoon, the CLEVELAND CULTURAL GARDENS honor the city's numerous ethnic groups. The park also contains tennis courts, picnic areas, playgrounds, walks, and the Rockefeller Park Greenhouse. Control of the land is vested in the CLEVELAND FOUNDATION as trustee for the Rockefeller Bros. Fund. By the 1990s improvements had begun to reverse the deterioration experienced since the 1960s. The lagoon was rebuilt to about half its original size, pavements were repaired and replaced, and a timberstand management program was implemented. A bikeway follows MLK Dr. through the Cultural Gardens. 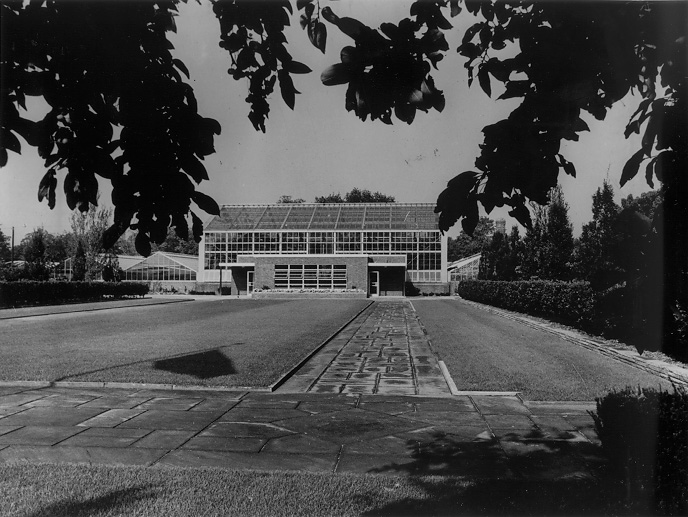 The new addition to the city greenhouse in Rockefeller Park stands at the end of a large grass field, 1964. Cleveland Press Collection, CSU Archives.