The CLEVELAND CULTURAL GARDENS are a series of landscaped gardens honoring the various ethnic communities of Cleveland, extending from Lake Erie to UNIVERSITY CIRCLE along East Blvd. and Martin Luther King, Jr. Blvd in ROCKEFELLER PARK. The Cultural Gardens are a unique park space in the United States, celebrating Cleveland’s ethnic diversity and the prospect of international peace and cooperation among nations.  As of 2019, there are 33 Cultural Gardens in Cleveland. According to Cleveland Cultural Gardens Federation Vice-President Paul Burik, "each garden acts as a 'storefront window' on that community that can be enjoyed by all, unlike many community centers or churches that are enjoyed only by the respective group."

The construction of the Cultural Gardens can be divided into three major waves (1916-1940, 1955-1985, and 2005-present).  The first major wave of Cultural Gardens began with the dedication of the Shakespeare Garden (today the BRITISH Garden) in Rockefeller Park in 1916.  The inauguration prompted journalist and Shakespeare enthusiast LEO WEIDENTHAL to devise the idea of preparing similar sites for each of the city’s ethnic communities.  In 1925, Weidenthal, together with Charles J. Wolfram and Jennie K. Zwick, established the Civic Progress League, which, in 1926, would become the Cultural Garden League.  The project also attracted the interest and strong support of Cleveland City Manager WILLIAM R. HOPKINS, who played a crucial role in realizing the series of ethnically-inspired green spaces in Rockefeller Park.  The HEBREW Garden, dedicated on a rainy May 6 day that year, would be the first of several ethnic gardens to appear along LIBERTY BLVD. (today Martin Luther King, Jr. Blvd.).  Hebrew poet Hayim Nahman Bialik, the guest of honor at the dedication, planted three cedars of Lebanon at the garden site and delivered an address in Hebrew.  Then, on May 9, 1927, the city set aside areas of Rockefeller Park for additional gardens. The next new garden to be built was the GERMAN Garden, dedicated on June 2, 1929 as part of the week-long Lessing-Mendelssohn Bicentennial celebrations.  The ceremony included the unveiling of a bust of the dramatist Gotthold Ephraim Lessing and the re-dedication of a replica of Ernst Rietschel's 1857 Goethe-Schiller Monument, one of four in the United States.  The Cleveland replica was originally installed at WADE PARK in 1907, before it was moved to the German Garden in time for the 1929 dedication.

Over the course of the next decade, 13 additional gardens would be added to the original first three (the Shakespeare/British, Hebrew, and German gardens), reflecting the major immigrant communities of the city, which comprised 30% of Cleveland’s population in 1920 (see IMMIGRATION AND MIGRATION).  They included the ITALIAN, SLOVAK, YUGOSLAV, HUNGARIAN, POLISH, CZECH, LITHUANIAN, IRISH, RUSIN, UKRAINIAN, and GREEK gardens, as well as two American gardens, the American Colonial Garden (today simply the American Garden) and the American Legion Peace Garden of the United States (now the Peace Garden of the Nations).  The SYRIAN community was allocated land for a garden by the city in 1929, but their project remained unrealized until the dedication of the Syrian Garden in 2011. Planning and fundraising for each garden was undertaken within the various ethnic communities, while the Cultural Garden League supervised the planning and coordination. Many of these original gardens were also built with support from the Federal government via the WORKS PROGRESS ADMINISTRATION (WPA), as part of President Franklin D. Roosevelt’s New Deal. In 1936, the city established a Division of Landscape Architecture and a plan devised by Hugo E. Varga, the Director of Parks and Public Properties, effectively unified the gardens into a single scheme with bordered paths.  Busts and statues in many of the gardens, especially the Czech, Slovak, Rusin, American, and Shakespeare (British) gardens were designed by acclaimed sculptor FRANK L. JIROUCH.  On July 21, 1946, a year after the Allied victory in WORLD WAR II and coinciding with Cleveland’s 150th anniversary on July 22, the gardens hosted the very first annual One World Day celebration. Inspired by the founding of the United Nations in San Francisco in 1945, the event commemorated the city’s various ethnic groups and was dedicated, in the words of THE PLAIN DEALER, to “world-wide understanding and co-operation.”  The very first One World Day was a massive musical parade with nationality floats, choruses, and bands playing melodies from the old world.  Held at a time when the city of Cleveland had a population of close to one million people, the parade started at downtown’s PUBLIC SQUARE and continued for six miles along EUCLID AVE. to the Cultural Gardens.  The ceremony would be held exclusively in the Cultural Gardens beginning with the second One World Day on July 20, 1947.  In 1949, the Cultural Garden League also oversaw the overall planning and coordination of the 2nd UNESCO Conference held in Cleveland in 1949.

The second wave of Cultural Gardens occurred over several decades, from the 1950s to the mid-1980s.  In 1952, the Cultural Garden League refashioned itself as the Cleveland Cultural Gardens Federation (CCGF).  Over the course of the next several years, only three new gardens were added: the FINNISH (1958), ESTONIAN (1966), and ROMANIAN (1967) gardens. T he tone of the gardens during this period began to reflect the politics of the COLD WAR.  Expressions of national difference became connected with expressions of American nationalism.  The plight of the “captive nations” of Central-Eastern Europe under communism, who were well-represented in the gardens, became emphasized.  For example, the centerpiece of the newly-established Estonian Garden was an abstract flame representing the hope for freedom, a not-so-subtle reference to the continued rule of Estonia by the USSR after its forced annexation in 1940 by Joseph Stalin.  However, as city residents increasingly moved to the suburbs, the gardens fell into neglect. During the troubled years of the 1960s and 1970s, many gardens suffered vandalism, and statuary was removed for safekeeping. Sometimes incidents of vandalism reflected urban racial strife, as in the cases of 1966 from both white supremacists and black nationalists.

Meanwhile, as the neighboring communities of GLENVILLE and HOUGH became increasingly AFRICAN AMERICAN, the question of establishing an African American garden began to increasingly emerge.  The issue was first raised in 1961 by Cleveland city councilman Leo Jackson who proposed building a “Negro Cultural Garden.”  The idea was intended not only to give African Americans representation in the gardens, but also to preserve the green space of Rockefeller Park against encroaching urban development.  Despite the project’s endorsement by Mayor ANTHONY J. CELEBREZZE, it was voted down by the city’s finance committee.  After the assassination of Martin Luther King, Jr. in 1968, Jackson sought to revive the issue of a “Negro Garden” with the statue of the late civil rights leader as its centerpiece. However, the idea of an African American Garden continued to remain unaddressed. A bust of Booker T. Washington added to the American Colonial Garden in 1970 proved to be an insufficient answer to the need of black representation in the gardens.  In 1976, Congressman LOUIS STOKES revived the initiative to create an African American Garden.  Although the garden was dedicated in October 1977, it remained unfinished until its final completion in June 2016 through the efforts of Cleveland Mayor Frank G. Jackson.  In 1985, during the MAYORAL ADMINISTRATION OF GEORGE V. VOINOVICH, the CHINESE Garden was established as a gift to Cleveland from its SISTER CITY of Taipei, Taiwan, a partnership established by Mayor RALPH J. PERK in 1975.  However, the Chinese Garden delegation, concerned about the garden’s visibility, insisted that its location be in Wade Park, across from the CLEVELAND MUSEUM OF ART.  They also contended that the Chinese Garden would give more attention to the Cultural Gardens and help promote development of the nearby neighborhoods.  Despite initial opposition from the mayor and the CCGF, the Chinese Garden was ultimately dedicated on the spot that the Chinese delegation had requested.

The third wave of Cultural Gardens commenced in the 2000s and remains ongoing.  It reflected the composition of Greater Cleveland’s new immigrant populations as well as new political realities in the old world.  The Yugoslav Garden had originally existed as a partnership between delegations from the Slovenian, Serbian, and Croatian communities.  However, the dissolution of Yugoslavia in the 1990s led to the parallel dissolution of the Yugoslav Garden. In 1991, the SLOVENIAN Garden inherited the Yugoslav Garden site.  In 2006, Alex Machaskee, then President and Publisher of The Plain Dealer, led the effort to establish the SERBIAN Garden.  The latter was dedicated in 2008 and inherited the Yugoslav Garden’s bust of the poet-philosopher Petar II Petrović-Njegoš.  Finally, the CROATIAN Garden was dedicated in 2010. In addition to the ex-Yugoslav gardens, the INDIAN Garden was dedicated in 2005, reflecting the growing Indian population in Greater Cleveland. Complementing the Lithuanian and Estonian Gardens, the LATVIAN Garden was established in 2006. 2008 saw the establishment of the Azerbaijan Garden, the second garden after the Chinese Garden not built with the funds from a local ethnic community.  Although Azerbaijanis were never a major presence within CLEVELAND’S POST-SOVIET COMMUNITY, the city nevertheless became noteworthy as the place where longtime Azerbaijani political leader, Heydar Aliyev, passed away during treatment at the CLEVELAND CLINIC.  The dedication of the ARMENIAN Garden in September 2010 was greeted with much fanfare by Cleveland’s Armenian community and played an instrumental role in the revitalization and further expansion of the gardens.  The establishment of the nearby TURKISH and RUSSIAN gardens soon followed in 2016 and 2018 respectively.  Leaving the feuds of the old world behind, the resulting concentration of the Armenian, Turkish, Russian, and Azerbaijan gardens together at the intersection of Martin Luther King and East Blvd. closely reflected the political geography of the Caucasus (with the notable exceptions of GEORGIA and Iran).

Other new gardens dedicated since 2000 include the ALBANIAN, Syrian, and Ethiopian gardens. The Lebanese Garden is currently under construction after breaking ground in May 2019, and the Colombian, KOREAN, NATIVE AMERICAN, UZBEK, VIETNAMESE, and Pakistani gardens are currently in the planning stages.  The proposed Colombian Garden is set to be the first HISPANIC garden, and Cleveland’s significant Puerto Rican and Mexican communities have likewise expressed interest in establishing gardens of their own.  In addition, other groups, notably the Brazilians, Filipinos, Iranians, Jamaicans, Macedonians, and Georgians, have expressed interest in establishing new gardens, ensuring further expansion of the Cultural Gardens in the coming years.  On June 11, 2019, construction commenced on the new Centennial Peace Plaza, designed by former Cuyahoga County architect Berj A. Shakarian, who also designed the Armenian Garden. Built in honor of the 100th anniversary of the Cultural Gardens, the plaza will serve as a geographic focal point uniting them all.  It is the centerpiece of the latest phase of Cultural Gardens expansion, which in many ways, mirrors the first phase of 1916-1940. Meanwhile, the annual One World Day celebrations continue to grow, with an annual naturalization ceremony of new immigrants introduced by the CCGF in 2002. Wael Khoury, MD, of the Syrian Garden, has served as the President of the CCGF since April 2017.

Today, the Cleveland Cultural Gardens proudly stand as major landmarks in the city. Together, they serve as a tribute to Cleveland’s position as a global hub on the Lake Erie shore, along the longest international border in the world, between the U.S. and Canada.   Even more significantly, they honor the city’s ethnic diversity and symbolize the ability of Cleveland’s various immigrant groups to overcome old world animosities and build a common future in the new world.  In the gardens, one can encounter monuments of feuding nations standing side-by-side – Arab and Jew, Armenian and Turk, British and Irish, Croat and Serb, and Indian and Pakistani. It is also the only place in the world that one can find a statue of Mahatma Gandhi on a boulevard named after Martin Luther King, Jr.  At this time more than ever, the gardens serve as an important symbol for the hope of international peace and cooperation. 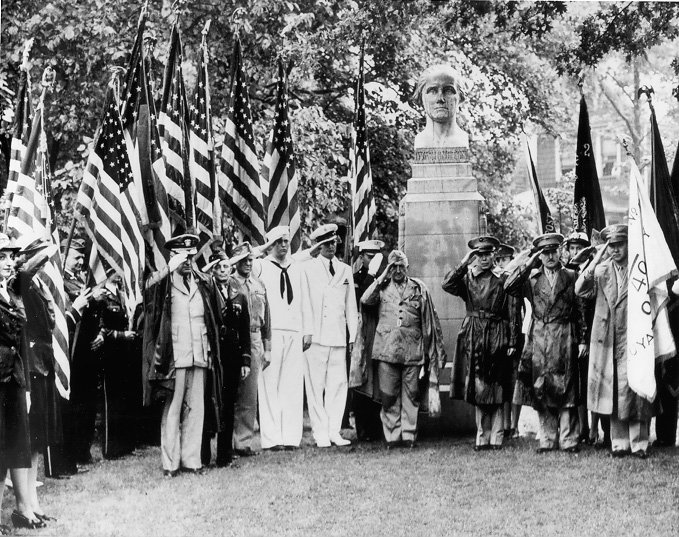 Dedication ceremonies at the American Cultural Garden, July 1943. Courtesy of the Plain Dealer.