The SEEANDBEE, once the largest and mostly costly inland steamer, began its career on the Great Lakes on 6 Nov. 1912. This 500', 6,381 gross tons all-steel ship could hold 1,500 passengers on its 4 decks. One of its features was an elegant ballroom. It was built for, and originally operated by, the CLEVELAND AND BUFFALO TRANSIT CO., a steamship and trucking firm. 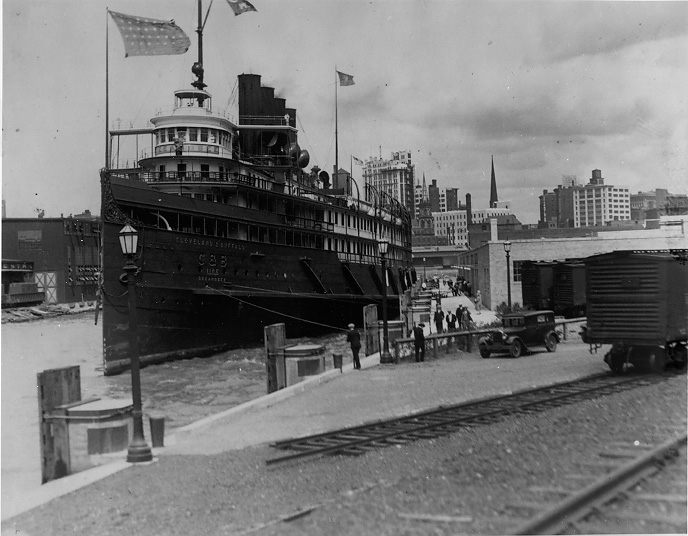 On its maiden voyage it carried members of the Cleveland Chamber of Commerce to Buffalo. Regular trips began in 1913 from the E. 9th St. pier. The Seeandbee operated on a Cleveland-Buffalo route, with special cruises to additional ports such as Detroit and Chicago. It was the pride of the Cleveland and Buffalo Transit Co., and a consistent moneymaker on its summer cruises. In 1939, the liquidation of the Transit Co. began due to the firm's heavy losses in 1938. That year the Seeandbee was sold to the C&B Transit Co. of Chicago. The Seeandbee operated on a regular schedule through 1941. In 1942 the Seeandbee was acquired by the navy and converted into the USS Wolverine. The Wolverine served as an aircraft carrier training ship in Lake Michigan during WORLD WAR II and shortly thereafter was scrapped.