SHORT VINCENT, a street 1 block in length between E. 9th and E. 6th streets NE, was once a colorful center of downtown Cleveland nightlife. Ofificially named Vincent Ave. NE, the street crossed farmland once held by John Vincent, and early Cleveland settler. After 1885, when the HOLLENDEN HOTEL was built, the street filled with restaurants and taverns to accommodate guests of the hotel, the back door of which faced Short Vincent. By the late 1920s the local saloons, eateries, and other small businesses became a gathering place for gamblers, sports figures, racketeers, lawyers, and newspapermen. Short Vincent offered good food, underworld gossip, and the odds on anything. It was home to such Cleveland landmarks as the Theatrical, the Taystee Barbeque, Frank Ciccia's Barbershop, the Grogshop, and Kornman's Restaurant. Morris "Mushy" Wexler opened the Theatrical in 1937, but he also ran the Empire News Service, a telegraph operation that simultaneously informed bookies around the state of changes in the line for horseracing and layoffs in football. While the north side of the street featured "respectable" businesses, the south was studded with girlie shows; the pavement between was referred to as the Gaza Strip. The ROXY (not actually on Short Vincent but near the street's junction with E. 9th) and other strip joints such as Freddie's Cafe and the French Quarter offered onlookers (particularly tourists) the opportunity to observe, and later be fleeced by, shapely bar girls. 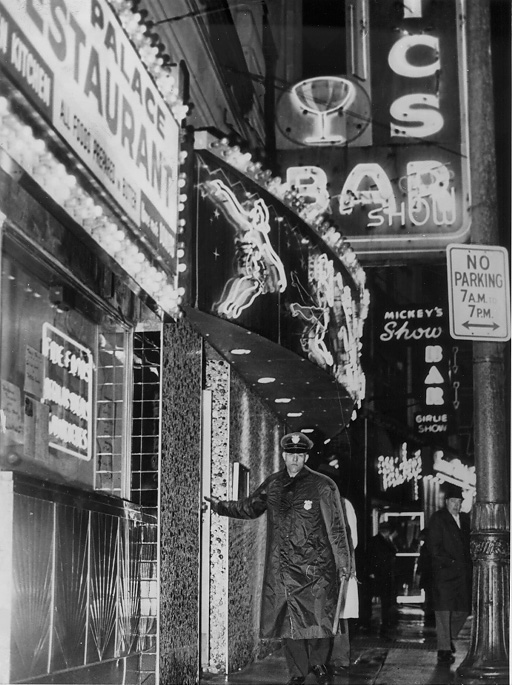 In its heyday in the 1930s and 1940s, Short Vincent was patronized by a band of newspaper reporters known as the Jolly Set. Led by CLEVELAND PRESS columnist WINSOR FRENCH, the group organized Fun for Funds, a charity bazaar, in 1953. The street was closed off, booths were set up, and a flagpole installed for Racehorse Richard Tuma, a bartender at Mickey's Show Bar, who for a month advertised the fair from his perch. On the day of the event, however, Tuma hurriedly shinnied down the pole when a tornado came to make a shambles of Short Vincent and the fair.

Despite its popularity, Short Vincent was the frequent target of civic outrage and law-enforcement-agency surveillance. The Ohio State Liquor Control Commission periodically tried to close down or suspend the licenses of the bars, while the newspapers ran exposes on the B-girls. What the forces of righteousness couldn't accomplish was finally done by urban redevelopment. By the early 1960s much of the north side was razed to make way for the Central Natl. Bank Bldg. The demolition of the south side was completed in 1978 to make way for the Natl. City Ctr.