The SOLDIERS' AND SAILORS' MONUMENT, situated on the southeast quadrant of Cleveland's PUBLIC SQUARE, is the city's major CIVIL WAR memorial. Designed by LEVI T. SCOFIELD, the monument was dedicated on 4 July 1894 after nearly 15 years of planning.

The initial drive to build a local monument began on 30 Oct. 1879, when a group of Civil War veterans met at CASE HALL in Cleveland to advocate such a project. Actual planning and funding of the monument were handled by a 3-man commission appointed under an act of the state legislature, passed on 16 Apr. 1888. The monument consists of an elevated base containing a tablet room. The base is surmounted by a column capped with a 15' high Statue of Liberty, bringing the total height of the structure to 125'. Surrounding the exterior of the base are 4 groupings of bronze sculpture (cast approx. one-third larger than life) depicting various battle scenes. These groupings represent the 4 main armed services: Infantry, Cavalry, Artillery, and Navy. The tablet room contains lists of Cuyahoga County residents who served in the Civil War, as well as 4 bronze reliefs representing the "Emancipation of the Slave," "Beginning of the War in Ohio," members of the various soldiers' relief organizations, and "The End of the War—The Peacemakers at City Point." The total cost of the monument was $280,000, all but $10,000 of which was raised through public taxes. Scofield donated all of his architectural services to the project.

The monument celebrated its centennial on 2 July 1994; Civil War historian James McPherson spoke at the ceremony. 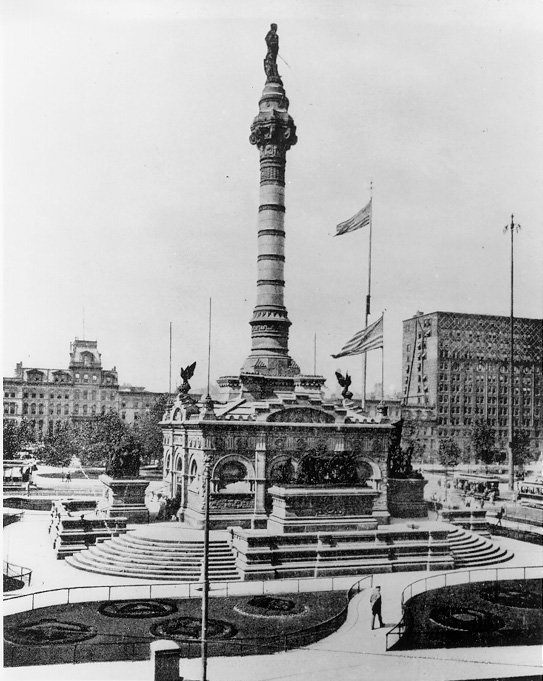 Soldiers and Sailors Monument on a nearly empty Public Square in the 1890s. WRHS.