ST. JOSEPH'S CHURCH, a landmark church that stood for over a century on Woodland at E. 23rd St., began as ST. BERNARD'S parish. A frame church for this GERMAN parish, at Woodland and E. 23rd streets, was begun in 1862 and dedicated to St. Joseph. In 1868, the Franciscan Fathers took charge of the parish and in 1868-70 a friary and chapel was built on E. 23rd St. In 1871 the frame church was demolished and the cornerstone of a brick structure was laid. Architects of the church were CUDELL and RICHARDSON. The church was dedicated on 5 October 1873 by Bishop GILMOUR, though the steeple was not completed until 1899. A new friary was built in 1893, and the old one became a school and parish hall. 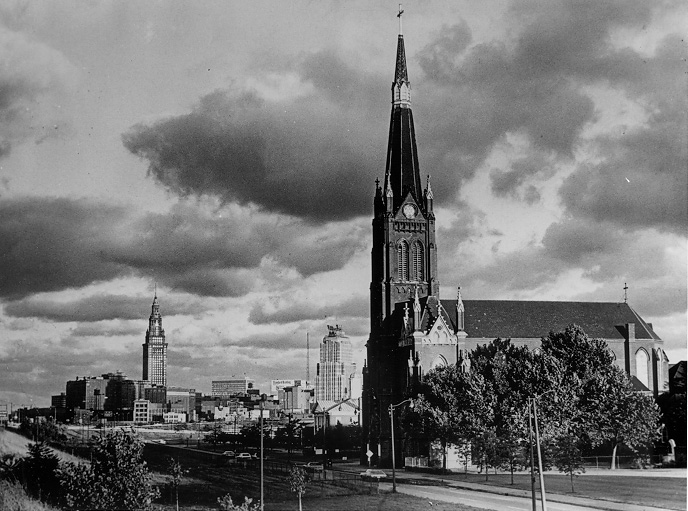 The church was noted for the German influence on its Gothic architecture as well as the elaborate interior; it was once called the "Cathedral of the East Side." Interior features included intricate wood carvings and impressive stained glass windows. St. Joseph's was one of the first churches in the diocese built to serve a European ethnic group in its native language. Several other ethnic groups later met in St. Joseph's including POLES, SLOVAKS, CZECHS, ITALIANS, and AFRICAN AMERICANS. By the 1970s, the congregation had dwindled due to an exodus of neighborhood residents, spurred on by the construction of nearby interstates and the effects of urban renewal. The church was closed in Sept. 1986 and deconsecrated. While plans for the future of the structure were being discussed, the church sustained a destructive fire in Feb. 1993 and was demolished. Items from the church were reused in other churches in the diocese.