ST. THEODOSIUS RUSSIAN ORTHODOX CATHEDRAL (733 Starkweather Ave.) is considered one of the finest examples of Russian church architecture in the U.S. Begun in 1911, the cathedral is the parish's third structure. The St. Theodosius Russian Orthodox parish was organized by immigrant CARPATHO-RUSSIANS living in TREMONT in 1896. They had worshipped at the Uniat Church, but conflicts led 23 men to form the St. Nicholas Society on 28 Sept. 1896. That society spearheaded the organization of the parish. The first church was a frame building at McKinstry (W. 6th) St. and Literary Rd.; its first resident pastor was Fr. Victor Stepanoff, who helped establish the school. At the end of 1902, the parish bought the St. John's Convent and the surrounding land for $30,000, largely through the efforts of John Ferencz, who mortgaged his own property to raise part of the money. Under the leadership of Rev. JASON R. KAPPANADZE (1902-08; 1922-57), the parish sold 80 individual lots from the convent land to parishioners for $125 apiece to raise funds. In 1909 the parish acquired land in Brooklyn Twp. for a cemetery.

The former convent served as the church until parishioners decided in May 1911 to build a cathedral. With the assistance of Fr. Basil S. Lisenkovsky, local architect Frederick C. Baird designed the $70,000 church, using features adopted from the Church of Our Savior Jesus Christ in Moscow. The cathedral was decorated with paintings imported from RUSSIA; it was dedicated on 19 July 1913. St. Theodosius became well known in the city as well as the Russian Orthodox community. By the mid-1930s, its a capella choir was praised for concerts at the CLEVELAND MUSEUM OF ART, and non-Russian Clevelanders attended its special services. By its 50th anniversary, St. Theodosius counted 1,200 member families. In Jan. 1953 the church commissioned murals by noted RUSSIAN émigré artist Andrei Bicenko. The cathedral was rededicated on 3 Oct. 1954. In the late 1950s, priests began to offer the liturgy in English as well as Slavonic. By 1974 membership had fallen to 600 families, but the church continued to be an important religious and cultural institution, sponsoring a Russian art exhibit in 1980 and offering regular choral concerts. St. Theodosius was placed on the National Register of Historic Places and in 1974 was named a Cleveland landmark. It served as the site for portions of the film The Deer Hunter (1978) in the summer of 1977.

In 1995 Fr. Jason Kappanadze, grandson of Jason A., served St. Theodosius's 400 member congregation. The church celebrated its centennial in 1996. 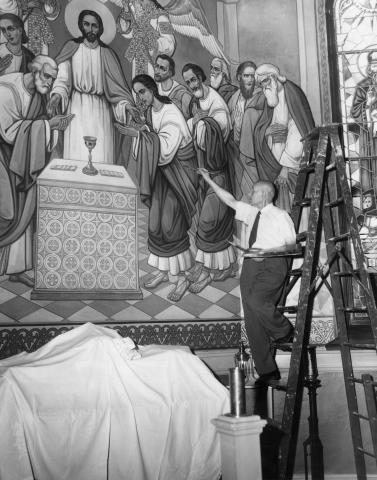