RUSSIANS. Since the dissolution of the Soviet Union in 1991, the Russian community of Greater Cleveland and Cuyahoga County has grown substantially. Large numbers of immigrants from Russia and the former Soviet Union have settled in Cleveland’s East Side suburbs, where they today form significant portions of the population (see: CLEVELAND-RUSSIAN RELATIONS).

It is difficult to accurately estimate the exact number of Russians in Greater Cleveland, given that “Russian” cultural identity can encompass various groups. These include not only the Great Russians, but also UKRAINIANS, JEWS, BELARUSIANS, ARMENIANS, GEORGIANS, UZBEKS, and others. Such a development is a natural outcome of the multiethnic character of the Russian state in its various historical forms, from the Russian Empire to the Soviet Union to the contemporary Russian Federation. In particular, the development of a strong unifying national identity within the Soviet Union, especially during WORLD WAR II, created a greater sense of social cohesion among all these groups. Therefore, one can be of multiple post-Soviet ancestries and still identify with the Russian community and Russian culture due to the shared experience of national identity formation within the USSR. This phenomenon is especially pronounced among the new immigrants from the post-Soviet space (see: SOVIET AND POST-SOVIET IMMIGRATION). Thus, this community can also be regarded as a “Russian-speaking” community in a broad sense.

Until 1991, Cleveland's Russian community was not very large, especially compared to those of other ethnic groups. The earliest immigrants from the Russian Empire were non-Russians, such as Jews, POLES, and FINNS who came to form their own distinct communities. The earliest self-identifying “Russian” immigrants were in fact CARPATHO-RUSSIANS who adopted Russian identities and EASTERN ORTHODOXY. Natives of the mountainous Austro-Hungarian province of Carpathian Ruthenia, they arrived during the late 19th and early 20th centuries and were largely working class. It was this early community that gave the city its preeminent Russian symbol, ST. THEODOSIUS RUSSIAN ORTHODOX CATHEDRAL in TREMONT.  They were followed by a small handful of Great Russian political refugees, often of a radical left bent, who were at odds with the tsarist government. After the Bolshevik Revolution of 1917, the political nature of Russian immigration to Cleveland reversed entirely as former supporters of the tsar (the so-called “White émigrés”) came to constitute the major portion of the local Russian immigration. These immigrants tended to be educated, highly literate, and members of the professional class, with diverse political views encompassing social democrats, liberals, conservatives, and monarchists. They seldom agreed on much, but all shared a common opposition to Vladimir Lenin and the Bolsheviks. Nevertheless, even with the influx of these new immigrants, the city's Great Russian community was estimated to have consisted of only 5,000 persons at most by 1932. The Carpatho-Russians aside, there was no real Great Russian neighborhood or concentration in the Cleveland area for many years. However, a small community could be found near E. 30th and Woodland Ave. by 1912. Its focal point was the radical Russian Workingman's Club.

The tendency of the Russians to scatter throughout the community was strengthened by the professional nature of the White émigrés, who were able to assume employment and residence in various sections of the city. Organizations within the new group of immigrants were initially few. Some did gather at HIRAM HOUSE social settlement. A Russian Circle was begun at the Intl. Institute of the YWCA in the 1930s; the 64 Russians enrolled at the YWCA lived in areas as diverse as LAKEWOOD, PARMA, and CLEVELAND HTS. In the 1930s, the city did have a branch of the liberal national organization the Russians Consolidated Union of Mutual Aid. Several local organizations started by the Soviet Union in Cleveland during the 1930s, including the Friends of the Soviet Union at E. 55th and Euclid and the Russian American Institute in the Erie Bldg., may have appeared “Russian” to the general onlooker, but they failed to garner any interest from the local Russian community. Instead, like the radical Ukrainian Labor Temple in the Tremont area, such institutions tended to attract American radicals or those from ethnic groups such as the HUNGARIANS and Ukrainians.

In terms of church communities, many White émigrés initially joined the city’s pre-existing Orthodox congregations, especially St. Theodosius, where Georgian-born FR. JASON KAPPANADZE, himself an émigré, served as pastor.  However, several of the newcomers (though not all) soon found themselves dissatisfied with the established Carpatho-Russian community, whose language and cultural customs (heavily influenced by centuries of Hungarian rule) they viewed as alien to their traditional notions of “Russianness.”  After World War II, the desire for a specifically Great Russian church resulted in the establishment of the St. Sergius Orthodox Cathedral in Parma in 1950, affiliated with the Russian Orthodox Church Outside of Russia (ROCOR). Today, St. Sergius falls under the jurisdiction of the Russian Orthodox Church in Moscow, due to the reconciliation between the Moscow Patriarchate and ROCOR in May 2007 under Russian Patriarch Alexei II.  The Russian American Cultural Society of Cleveland was also founded in 1950 and, since 1951, it has held the annual Tatiana Ball, in honor of Tatiana Day, alongside the Miss Tatiana Pageant. The balls have featured prominent performers over the years, including singer Vera Brynner (sister of celebrated Russian American actor Yul Brynner) and Metropolitan Opera tenor Nicolai Gedda.

Given the virtual impossibility of emigration from the Soviet Union, Cleveland's Russian population received little replenishment until the 1970s, when, by virtue of international pressure and agreements between the USSR and U.S., a number of Russian Jews migrated to the U.S. and to Cleveland. Many of them took up residence in the Jewish community of Cleveland Hts., with much of its activity centered in the COVENTRY VILLAGE BUSINESS DISTRICT. After the dissolution of the Soviet state in 1991, a renewed immigration began from all former Soviet republics. This led to an increased flow of Russians of all faiths, Jewish, Orthodox, and Protestant, to cities such as Cleveland.  Most of these new immigrants arrived primarily from Russia, Ukraine, Belarus, Uzbekistan, Armenia, Moldova, and Kazakhstan. Among them were representatives of all classes, but especially the professional class. As of 2019, the Russian-speaking population of Cleveland and Cuyahoga County is now larger than at any time in the past, numbering an estimated 75,000 people and still being replenished by new immigrants from the post-Soviet space.  By the beginning of the 21st century, the geographic distribution of the community expanded east from Cleveland Hts. into neighboring MAYFIELD, MAYFIELD HEIGHTS, SOLON, BEACHWOOD, LYNDHURST, PEPPER PIKE, ORANGE, and MORELAND HILLS.  According to the US census estimates of 2018, 40% of the foreign-born population of Mayfield Heights (about 10% of that city’s population) was born in one of the fifteen former Soviet republics. Since 2010, immigrants from the post-Soviet space (especially from Russia, Uzbekistan, and Ukraine) have also begun settling on the West Side of Cleveland and the adjoining suburbs, especially Lakewood.

The arrival of these new immigrants has enriched existing local institutions, such as St. Sergius and St. Theodosius, and led to the establishment of entirely new ones.  Along Mayfield Road, one can find several Russian cultural institutions established since the 1990s, including the Red Square Party Center, Mayfield Fine Foods, and the large Yeleseyevsky Deli, which sells imported goods from across the post-Soviet space.  Along with these have been the establishment of the Banya Tamazonka spa in Cleveland Hts. as well as many restaurants in the Cleveland area, including Restaurant Europa in Pepper Pike, Jubilee Armenian Restaurant in RICHMOND HEIGHTS, and the Ukrainian Olesia’s Place in NORTH ROYALTON, which began as the Odessa Deli in the OLD ARCADE in downtown Cleveland. Since 1993, the bi-weekly Russian-language Cleveland Russian Magazine has been published in the city by Michael Feinstein and in 2002, Bakhtiyar Bakhtiyarov, a Belarusian state television director-turned-dissident, began another Russian-language publication, Prospekt.  In June 2016, through the work of community leaders Svetlana Stolyarova and Boris Vinogradsky, the Russian Cultural Garden broke ground alongside the other CULTURAL GARDENS in Cleveland’s ROCKEFELLER PARK.  Since 2011, the Cleveland Russian Festival has been celebrated annually at St. Sergius, while Maslenitsa (the Russian Strovetide) has been celebrated annually at the Rockefeller Park Greenhouse since 2015.  In 2007, Slavic librarian Victoria Kabo began a Russian book club at the CLEVELAND PUBLIC LIBRARY and, in 2013, she initiated Russian-language children’s programming at the library to serve the needs of the community. Post-Soviet immigrants are well-represented on the faculty of the CLEVELAND INSTITUTE OF MUSIC, including world-renowned artists Sergei Babayan, Dina Kuznetsova, and Ilya and Olga Dubossarskaya Kaler.  They continue a tradition of Russian representation in Cleveland’s classical music scene, dating back to the tenure of Russian-born NIKOLAI SOKOLOFF as the first conductor of the CLEVELAND ORCHESTRA.

Russian cultural figures have a long history of visiting Cleveland.  In 1922 and 1925 respectively, Russian Silver Age poets Sergei Yesenin and Vladimir Mayakovsky visited the city, while the Odessa-born satirists Ilf and Petrov arrived in Cleveland in 1935 during their American Road Trip.  In summer 2006, Russian American journalist Vladimir Pozner and Russian TV host Ivan Urgant came to Cleveland as part of their quest to retrace Ilf and Petrov’s journey.  Since the arrival of the post-Soviet immigrant community, visits by high-profile Russian writers, poets, actors, singers, and musicians have become much more frequent.  Narine Abgaryan, Dmitri Bykov, Konstantin Khabensky, Yuliy Kim, Tatyana Tolstaya, Lyudmila Ulitskaya, Vladimir Voinovich, and Mikhail Yefremov are only a few of the big names who have visited Cleveland since 1997 with the sponsorship of local cultural patron Zhanna Magaram.  Moreover, since June 2010, a three-day Russian cultural festival “Balaganchik” has been held annually in East Rochester, OH, 85 miles south of Cleveland, bringing together Russian-language musicians and performers from all parts of Russia and the post-Soviet space, as well as the US, Canada, and Israel.

The Russian community also has a long history of involvement with DANCE.  Between 1910 and 1922, renowned ballerina Anna Pavlova came to Cleveland five times.  In 1916, Sergei Diaghilev’s Ballets Russes arrived in the city on its first American tour and returned the following year with a performance by Vaslav Nijinsky. Soviet dancer Rudolf Nureyev came to Cleveland a number of times after his defection from the USSR and performed Flemming Flindt’s The Overcoat (based on Gogol’s short story) with the CLEVELAND BALLET at the 1990 Edinburgh Festival.  Mikhail Baryshnikov, who also defected from the USSR to the West, performed in Cleveland as well. Russian dancers began teaching their craft in Cleveland in the 1920s.  NIKOLAI SEMENOFF, who had danced with the Bolshoi and Diaghilev companies, arrived in the city to teach dance in 1925 at the invitation of a group of society women.  Following Semenoff's untimely death, Serge Nadejdin, Semenoff's teacher and a graduate of the St. Petersburg Imperial School, assumed his position and taught dance for the next 25 years at the HIPPODROME. Sergei Popeloff, a dancer with Pavlova who had been teaching his art in Cleveland since 1921, established the first Cleveland Ballet at Carnegie Hall in 1935. The tradition of Russian involvement in Cleveland's dance scene has continued with the re-founding of the Cleveland Ballet by Odessa native Michael Krasnyansky and his wife, Puerto Rican-born artistic director Gladisa Guadalupe in 2014.  The company resides at PLAYHOUSE SQUARE and, as of 2019, it is the fastest growing ballet company in the nation. 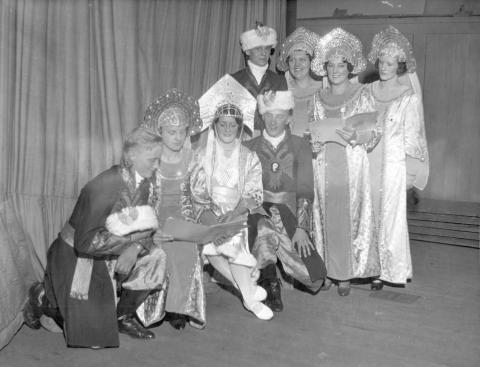 From the personal collection of Pietro A. Shakarian.
Members of the St. Theodosius Church Choir, under the direction of A. P. Glagolev, 2 November 1933.

On May 3, 2019, through the efforts of longtime Russian community leader Kenneth Kovach, the City of Cleveland officially recognized Russian Community Day at special ceremony held at CLEVELAND CITY HALL. The flag of the Russian Federation flew over City Hall and delegates from the Cleveland’s Sister City of Volgograd were in attendance. The event was a testament to the vibrant cultural life of the Russian-speaking community of Greater Cleveland.