TAFT, SETH CHASE (31 Dec. 1922 – 14 April 2013) was a lawyer, civic leader, and Republican Party politician best known as CARL STOKES' opponent in the famous 1967 Cleveland mayoral race narrowly won by Stokes. From 1971-1978 Taft served on the Cuyahoga County Commission, the last two years as chairman, where he pushed for regionalization of government services. As a commissioner, he was an important figure in two large civic projects of the 1970s: the Cleveland transit system and the Justice Center complex downtown.

Over the years, Taft was affiliated as a lawyer, trustee or officer with a number of major community organizations in northeast Ohio, including: UNIVERSITY CIRCLE, INC.; the CLEVELAND FOUNDATION; the CLEVELAND COUNCIL ON WORLD AFFAIRS; the CITY CLUB OF CLEVELAND; the Cleveland Metropolitan Services Commission; the CITIZENS LEAGUE OF GREATER CLEVELAND; the Cuyahoga County Charter Commission; the GREATER CLEVELAND GROWTH ASSOCIATION; and WVIZ (Cleveland’s educational television station).

Taft practiced law at the firm of JONES DAY from 1948 until his retirement in 1988, including 30 years as a partner.  In the early 1950s Taft and his wife, Frances Prindle Taft, joined with two other families to start Pepper Ridge, a planned community of contemporary-style homes in PEPPER PIKE, 12 miles east of Cleveland.  Taft lived there for 60 years until his death.

Taft was a grandson of William Howard Taft, the only person to have served as both U.S. President (1909-1913) and Chief Justice of the U.S. Supreme Court (1921-1930). The Tafts, Ohio’s most famous Republican family, also included two U.S. senators, one governor, two U.S. Secretaries of War, and a U.S. attorney general. Seth Taft’s father, Charles Phelps Taft II, was known as “Mr. Cincinnati” and in the 1950s served a term as mayor during his long career on the city council.

Seth Taft was thus heir to an old-fashioned code of politics and was part of what was then a moderate wing of the Republican Party.  He practiced a restrained patrician style of civic leadership guided by principles such as probity, consensus, and duty.  He recoiled, for example, from the reactionary “alien-baiting” of the 1950s McCarthy period. At the 1964 Republican National Convention in San Francisco he worked with establishment figures such as Jacob Javits and Henry Kissinger to draft platform language on nuclear arms control, part of Taft’s lifelong interest in international issues.

Like many in his family, Taft attended Yale College (Class of 1944) where he was editor of the Yale Daily News and president of the Political Union. After a stint as an officer in the U.S. Navy during WORLD WAR II, serving on a destroyer escorting convoys of merchant ships in the North Atlantic, Taft earned his LLB from Yale Law School in 1948.  By then he was married and was the father of the first of his (eventually four) children.

Taft’s move to Cleveland after law school was a turning point in his life. The ostensible reason was to accept a job offer from Jones Day, one of the city’s leading law firms.  But the decision was more layered. The move also opened up the option of running for elective office in a city a little removed from his hometown of Cincinnati.

In subsequent decades, Taft ran for a number of different offices: the state senate in 1962; the Board of County Commissioners of Cuyahoga County in 1970, 1974 and 1978; and the governorship in 1982. But it was in his campaign against Stokes in 1967 that Taft gained, if not victory, at least widespread recognition and respect. The election was historic because in winning the election Stokes became the first black mayor of a major American city. Taft was credited for setting an elevated tone and keeping the focus on issues, avoiding divisive rhetoric in a racially charged situation. 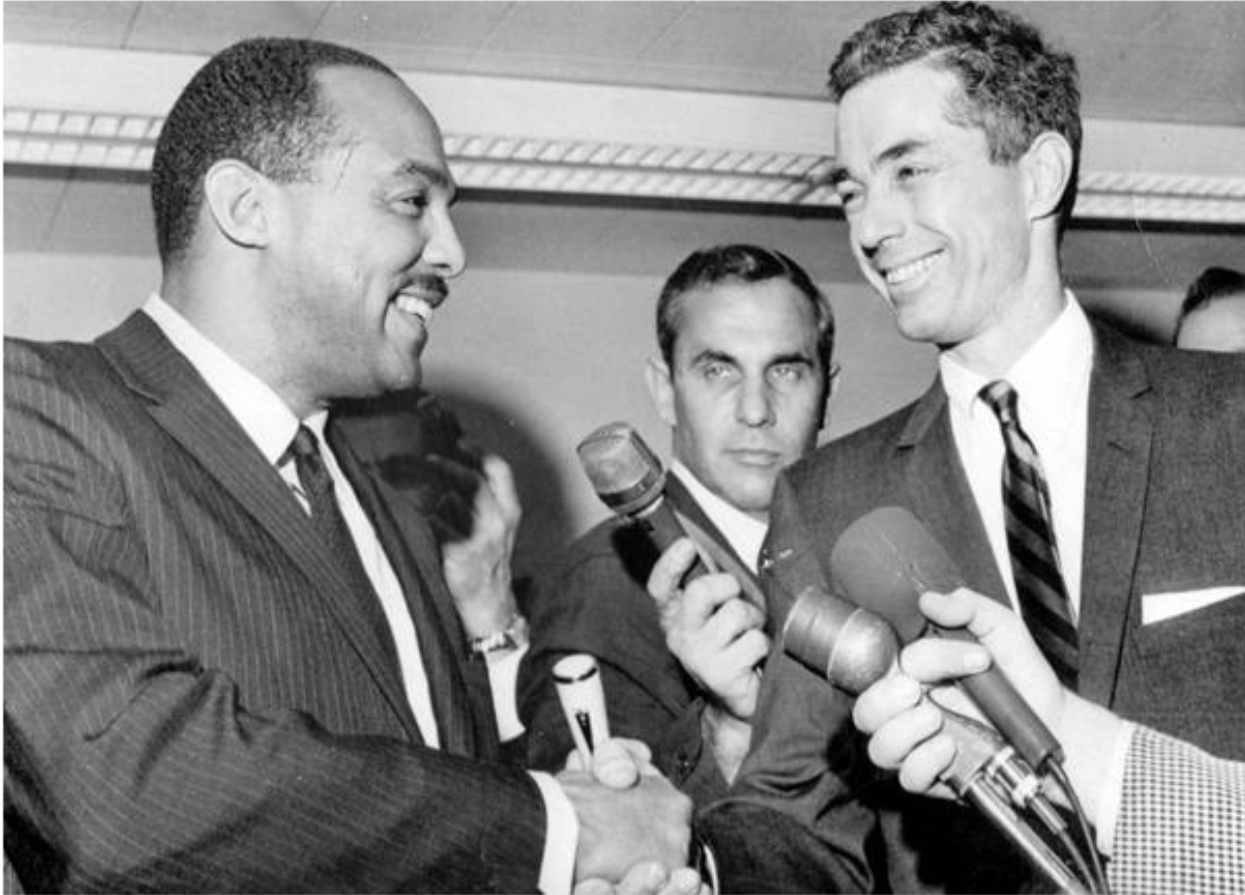 Taft had seriously considered running for mayor in the special election of 1962, but ultimately decided to wait.  As the 1960s wore on, Cleveland, like many American cities, was marked by acute racial turmoil. In July 1966, deadly riots in the Hough neighborhood shocked the city and pointed to deep-seated problems like poverty, black unemployment, poor-quality schools, racism and mistrust between Cleveland’s black residents and the police department. To the business establishment and others, incumbent Democrat Ralph Locher seemed increasingly out of step. By early 1967 Taft concluded Locher was vulnerable and sensed an opportunity in that year’s election. Taft entered and won the Republican mayoral primary. Locher lost the Democratic nomination to Stokes, a charismatic state legislator and veteran Cleveland political figure. As an African-American with appeal to a significant portion of liberal-to-moderate white voters, Stokes seemed well-positioned to steady the city in a difficult time and was favored to win the general election. His groundbreaking candidacy drew national and even international attention.

Taft ran an effective underdog campaign. In the closing weeks, he performed well in debates and narrowed the gap in the polls. He developed a platform that resonated with both sides of Cleveland’s traditional racial divide: white ethnic voters and the black community. He stressed both effective law enforcement and a new approach to race relations. He emphasized a number of issues he had worked on for years: business development downtown, fair housing, mass transportation, education, employment, competent government, and the need to combat air and water pollution.

Out of more than a quarter million votes cast, Taft lost by only 1,851. He was magnanimous in defeat, which served the city well at a tense moment. Any bruised feelings from the campaign quickly subsided and in subsequent years the two former rivals worked together on various civic endeavors. Stokes supported Taft in his successful race for County Commissioner in 1970.  When Stokes died in 1996, his family asked Taft to deliver one of the eulogies. “I sincerely salute Carl Stokes,” Taft said, “Carl’s election and service as mayor were the breakthrough for equal opportunity in politics.”