The STREETCAR STRIKE OF 1899 began on 10 June 1899. Over 850 employees of the Big Consolidated Line of the CLEVELAND ELECTRIC RAILWAY CO. voted to strike for better wages and working conditions and union recognition. Rioting broke out across the city as police attempted to keep mobs from damaging the streetcars and attacking the nonunion men the company employed to operate them. President SYLVESTER EVERETT of the railway company rejected the strikers' demands, continued to hire strikebreakers, and refused to meet with the State Board of Arbitrators who arrived in Cleveland on 12 June. 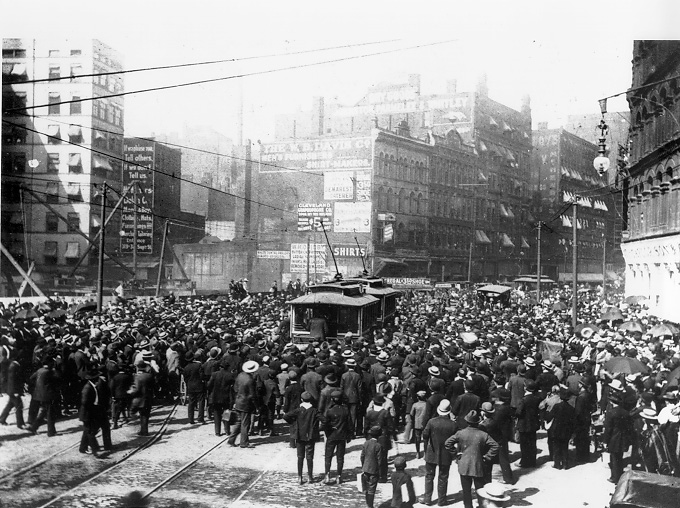 Crowds converge and stop traffic during the streetcar strike of 1899. WRHS.

On 20 June a crowd of 8,000 attacked the company's Holmden Barns on the city's south side, threatening the lives of nonunion men and wrecking cars; police were able to disperse the crowd without bloodshed. It appeared the strike had ended on 24 June when the company took back 80% of the strikers and promised to restore the old work schedules. For the next 3 weeks, however, intermittent rioting continued on the south side where nonunion men continued to run the cars. On 17 July the employees struck again, claiming that the company had disregarded its promises concerning work schedules, and Everett immediately hired strikebreakers, precipitating more destructive violence as cars and tracks were blown up. Mayor JOHN FARLEY summoned state troops on 21 July and Everett announced that he would rehire men only as individuals, not as union members. By the end of July, state troops, including members of Cleveland's TROOP A, controlled much of the rioting and began to withdraw from the city. During August more men applied for reinstatement while the union attempted to enforce a boycott of businesses and individuals who patronized the Big Consolidated lines. Although outbreaks of violence continued into the fall of 1899, Everett was able to increase the level of streetcar service and the strike faded away.